Campaign Summary: There were 269 consultations and 28 surgical procedures performed. Some of the procedures were cystectomies, tympanomastoids, septoplasties, polypectomies, and a parotid surgery. 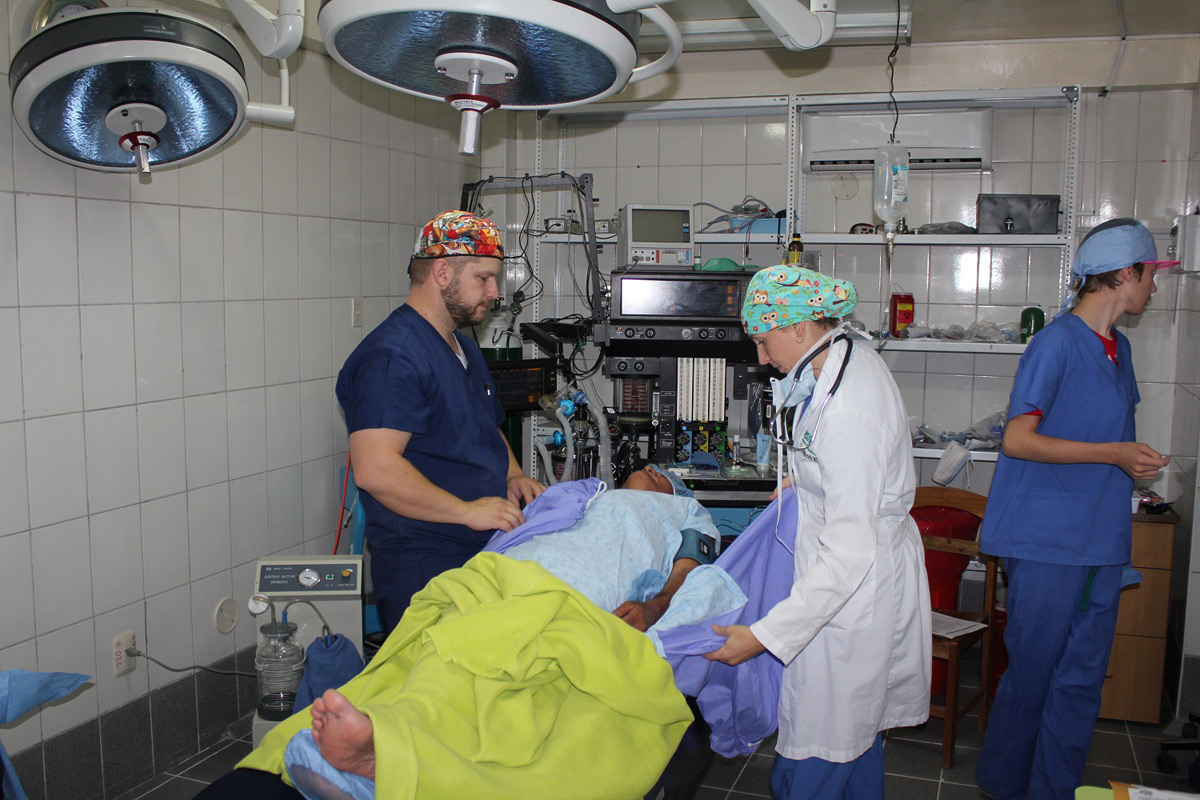 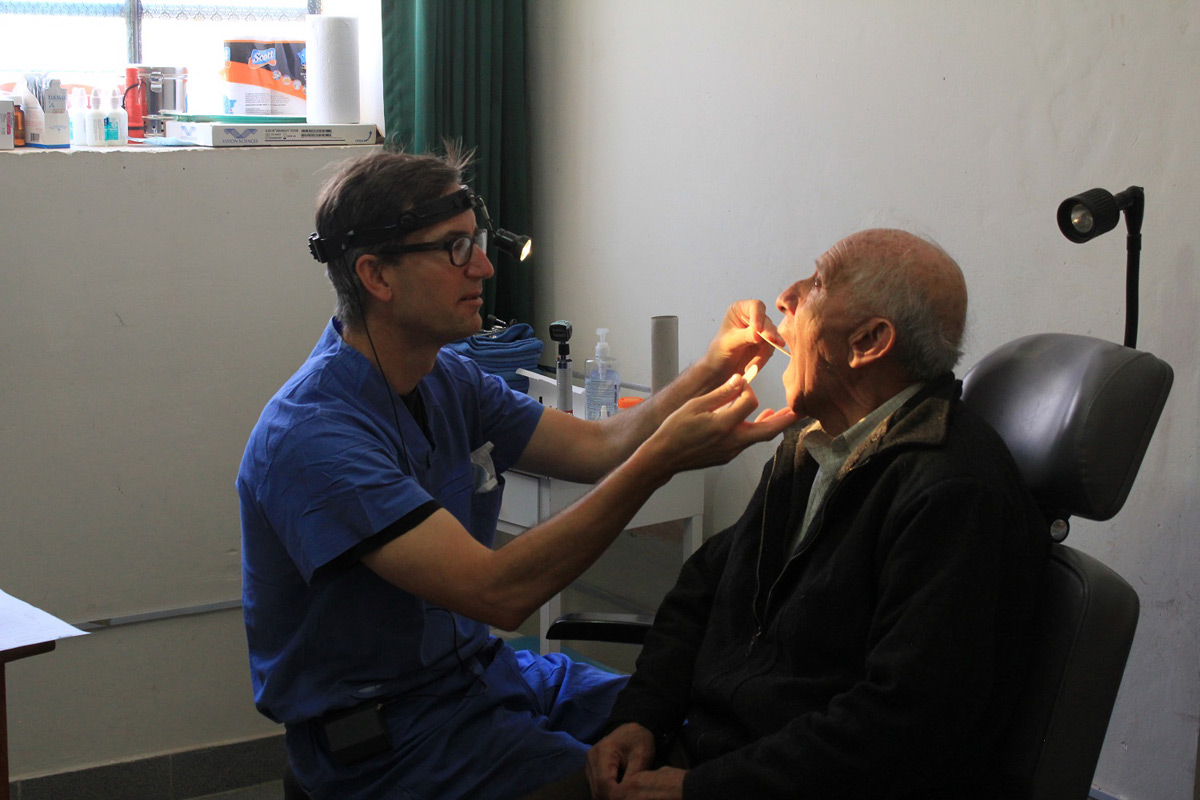 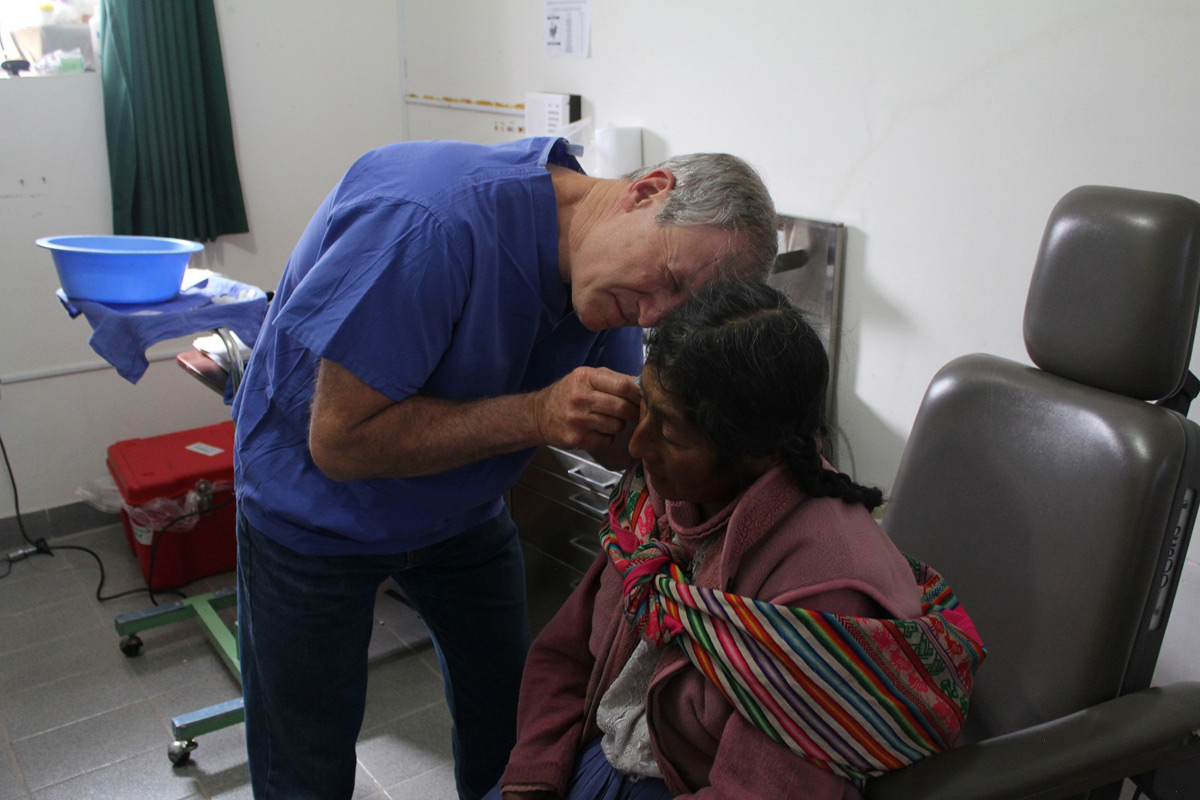 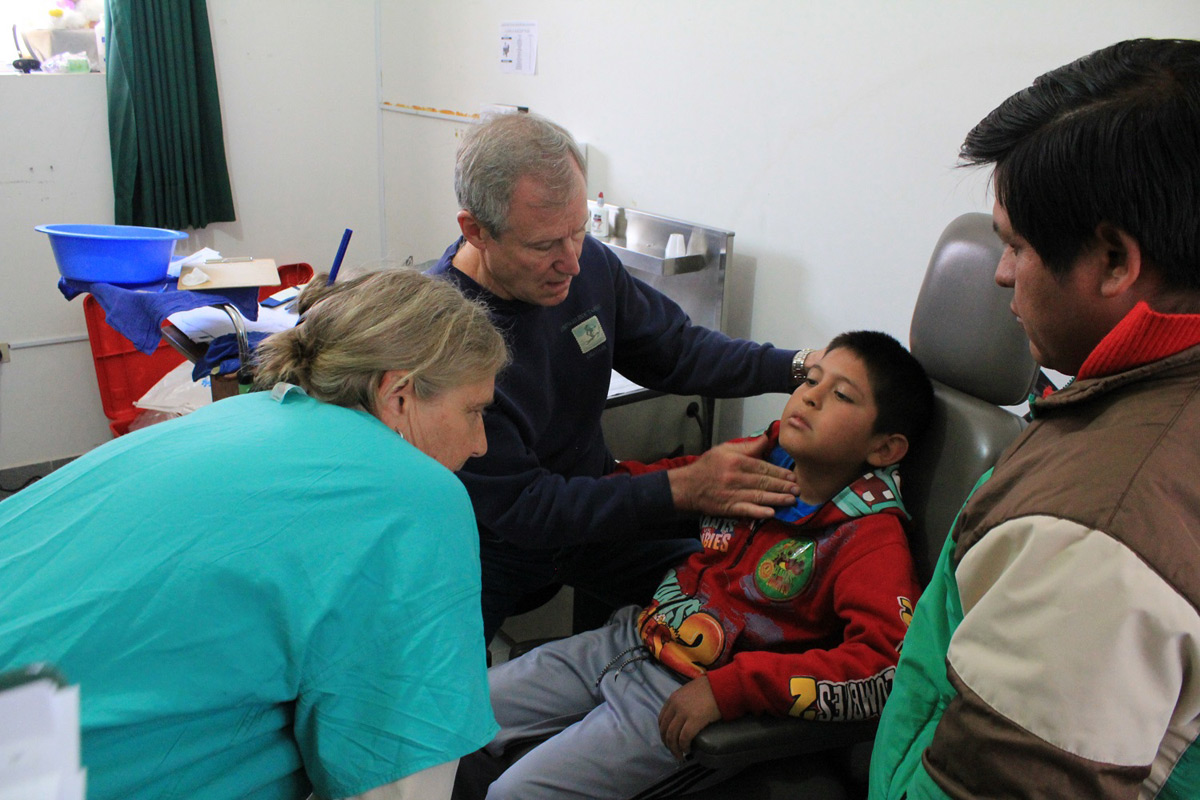 Dr. Mitch Brock Conducting an Exam on a Patient with Translator Beverly Elder of the Clinic 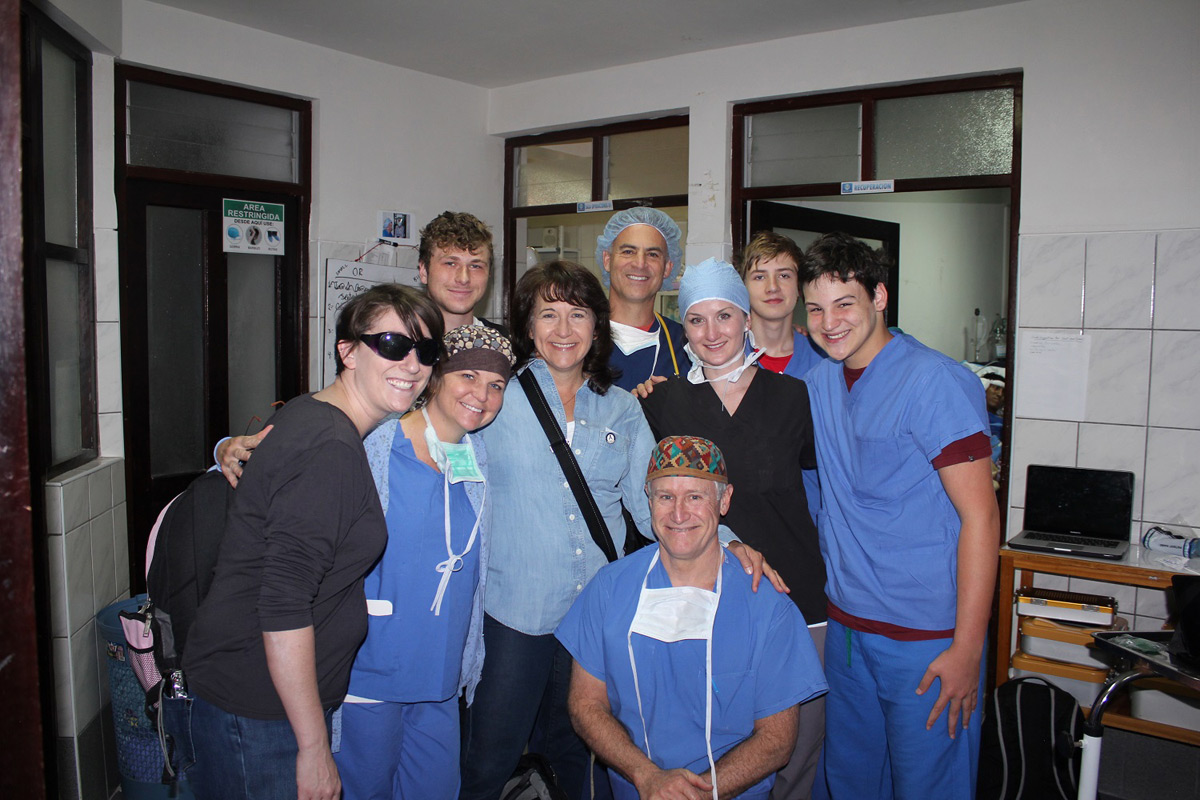 One of the Daily Team Meetings 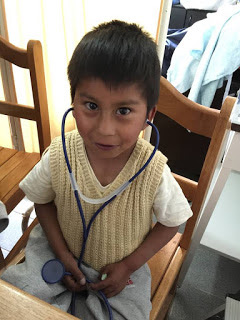 Patient Saul Begins to Prepare for his Medical Career 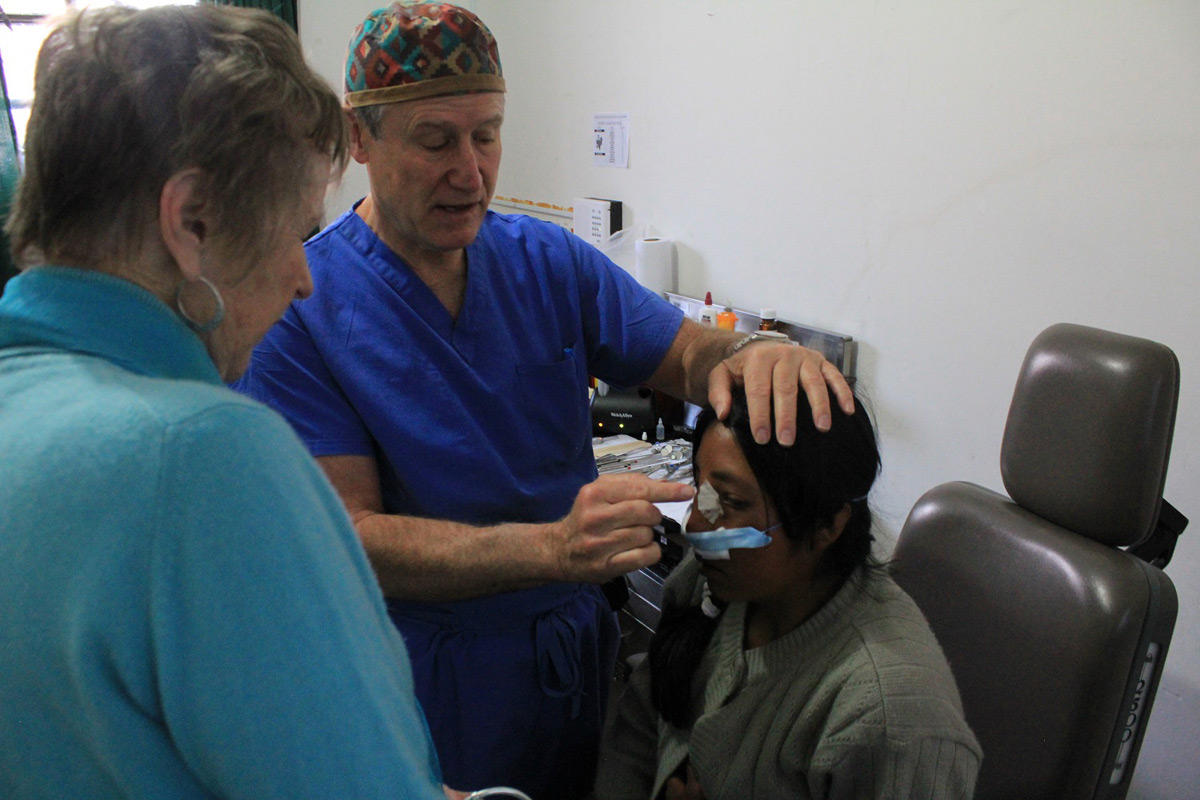 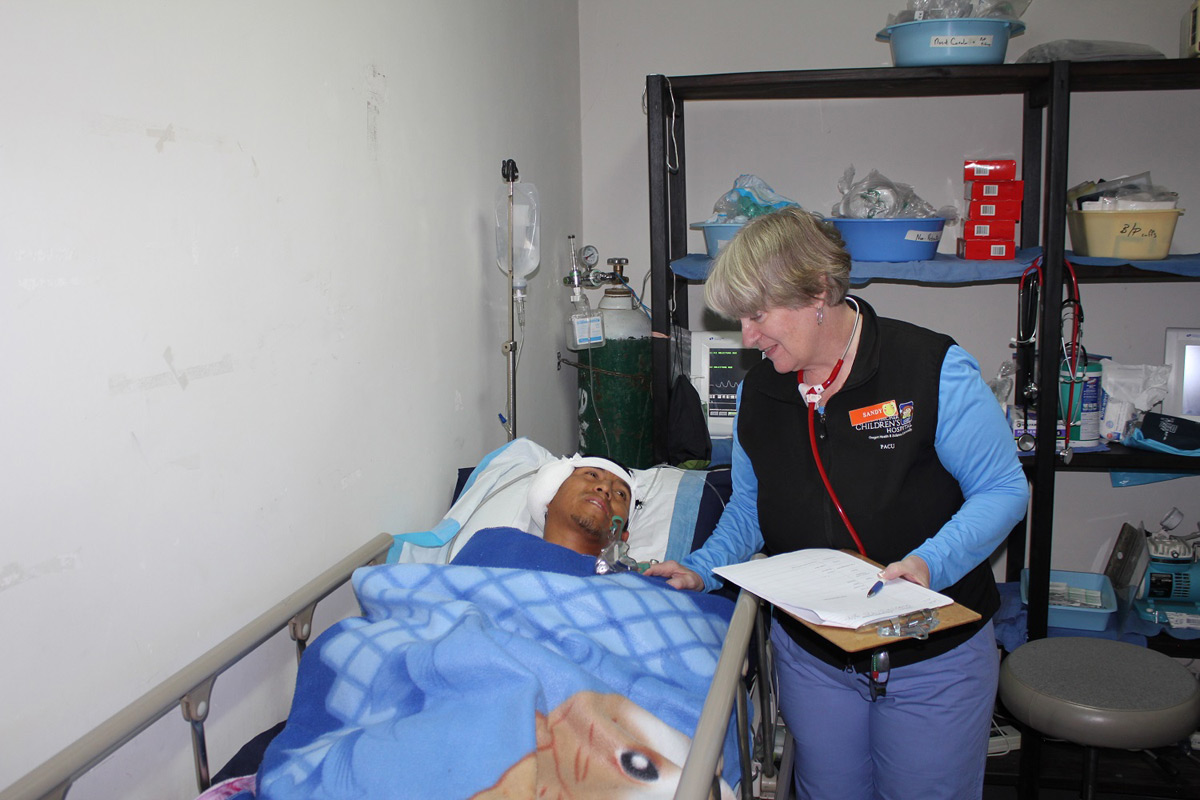 Sandy McDonald with a Pateint After Surgery 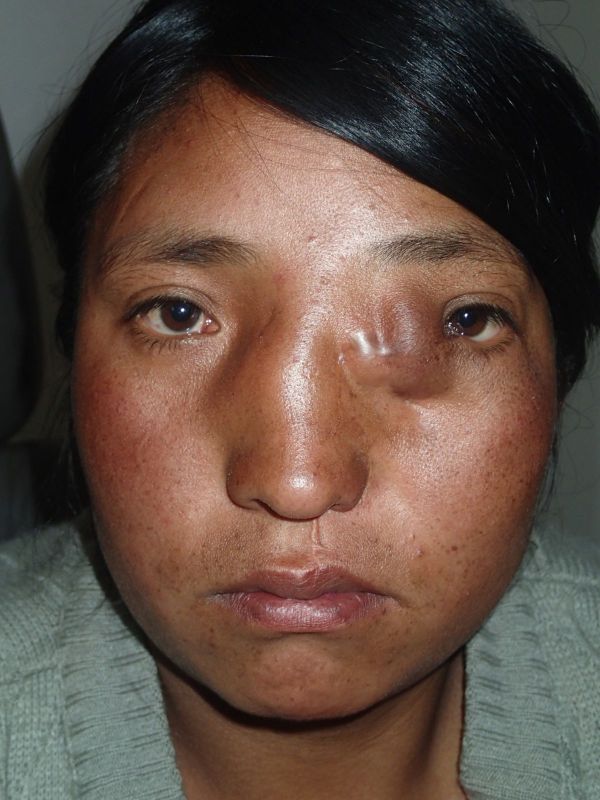 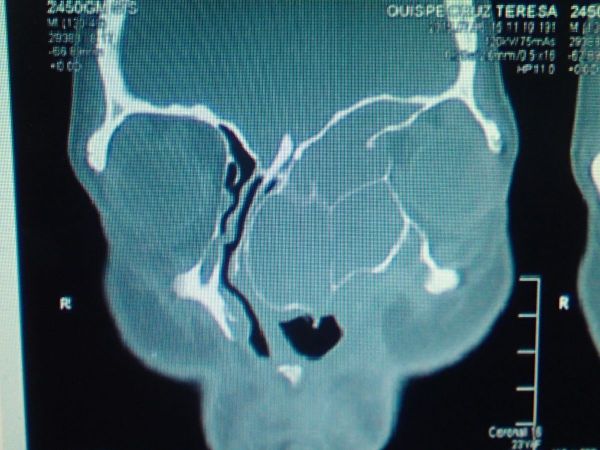 SUNDAY, SEPTEMBER 27, 2015
WELL I JUST ERASED ONE HOUR OF WRITING AND VERY SLOW UPLOADING
I was hoping that we got our bad luck all done in Portland. One of our team members realized at the ticket counter that the name on her passport and the name on her ticket did not match. Needless to say she had to remain in Portland until the travel agent was able to issue a new ticket. She is in route now and will arrive sometime tomorrow.

Then one of the surgeons got caught in security for a long time. An Alaska Airline agent boarded the plane and was calling out Steve Long. We all jumped up and looked around. We pleaded for them not to leave without him. Luckily he made it back on before take-off.

And another team member’s luggage broke at the airport and he had to go and buy a new suitcase and repack in the middle of the airport.

Now for the long trek to Lima. I actually fell asleep before the plane departed. I woke up when my row-mate got food, then I tossed and turned. We arrived in Lima and despite having to open every medical bag, we flew through customs.

The flight from Lima (at sea level) to Cusco (12,500 feet) in one hour is always an adventure. Imagine the Andes 20,000 feet high. Imagine a city in the valley. Now think about a plane dropping out of the sky and slamming its brakes for a very short runway. White knuckles every time.

Today we set up the clinic. The doctors screened patients. Some went on a tour. Lourdes and I had a relaxed day. We walked around Coya including the cemetery. Very interesting. We chatted with a family setting fresh flowers at a grave. Then they asked us to pray with them. We did. Very touching.

Then we went to the market in the nearby city of Pisac. I ran into a family I had purchased a weaving from on a previous trip. They remembered me. Fun.

Then dinner with the team.

MONDAY, SEPTEMBER 28, 2015
WELL MY HEART HAS BEEN STOLEN AGAIN
Yesterday as I walked around in the village a very cute boy said, “Hola.” For those of you who know me, I love children and just have to stop and play with all the adorable kids. There was what appeared to be a sister there as well. These two adorable kids were sitting on their stoop. Literally 1/2 block from the Clinic. I have walked by this house for years. So I of course stopped to play with him. He was soon joined by his mom.

Later in the day his family was out for a walk and pushing him in a cart because he cannot tolerate any exertion.

Today at the Clinic I was telling Sandy and Guido, the Directors of the Kausay Wasi Clinic, about Saul. So Dr. Karoline Brock, a pediatrician on our team, agreed to see him and begin an evaluation. We wondered if he has VACTERL Association. Sandy and Guido said they will contact a cardiologist in Arequipa and see if we can get him evaluated, then figure out the rest of his health issues.

TUESDAY, SEPTEMBER 29
SAUL
Now the whole team has fallen in love. After his examination by Dr. Karoline Brock, he will have a cardiac echo. We are working on making connections with a pediatric cardiologist and the organization Cardiostart that comes to Peru and do cardiac surgery. The ball has started to roll. We will see what the evaluation shows.

WEDNESDAY, SEPTEMBER 30, 2015
HUMP DAY – AND A BUSY ONE IT WAS
I just got back to my room at 7:00 PM too tired to go out to eat. Jason is bringing back some quinoa soup. Thank you Jason. My feet are up trying to relax. We did seven surgeries today – six were planned and one was added on.

One patient, shown in the photos, came to us by herself from the jungle somewhere. Her name is Theresa and she is 24 years old. Somehow she had gotten a CT scan, also shown in the photos, that indicated there was a large mucocele, a benign fluid filled tumor from the sinues. The tumor was between her left eye and nose reaching back into the ethmoid sinus. The tumor caused hypertelorism where her eyes had been displaced far apart. She wore her hair to cover her left face. Both doctors operated to remove the tumor and created a drainage system preventing further pressure on her eyeballs. The surgery was amazing to watch. Unfortunately, her eyes are not expected to return to their natural position due to the remodeling of her facial bones.  Since Theresa came alone with no family, Margo, a clinic staff member, took her home to look after her and Theresa eventually returned home we think. Sadly, she did not return for follow-up on our next trip.

We did four septoplasties and two big ear cases. One was on an 11 year old girl. She was so brave.

Two more days of operations to go. Tomorrow will be a busy busy day – two tympanomastoids, two septoplasty, one polypectomy, and one parotid surgery.

On my way home I got hugs from my buddy Saul.

If Saul can get to Lima, he’ll be seen soon for an evaluation by a local team that was trained by Dr. Alejos. Then a mission team will be down in a few months to operate on Saul! Boom! Team Lima will be contacting the Kausay Wasi Clinic. It pays to know people. Thank you Kate Ropp.

FRIDAY, OCTOBER 2, 2015
I said my goodbyes to Saul in his house/store this morning. Such a humble dwelling with dirt floor bedrooms off the storefront. I, of course, balled my eyes out. He gave me a holy picture. His dad gave me his email. Later he was outside my B&B with his sister and dad. They push him around in a cart. I’m sure his cardiac reserve at 10,500 feet is not great. His sister asked my name and then with tears in her eyes she said thank you very much. I lost it again. She is 5.

Each trip I come away impacted, changed and always humbled. Sometimes it is a collection of little things. Sometimes there is a very poignant moment. It is always wonderful to see that we can make a positive impact on folks’ lives by Improving their hearing or allowing them to breathe more easily. They are so grateful. Despite our language difficulties, we can communicate from the heart.

In Zimbabwe Tinotenda stole my heart. This year it is Saul.

I contacted Kate Ropp, a friend and pediatric anesthesiologist who was on our team last year. I knew she had been on a cardiac mission trip during her fellowship. Well, Kate came through big time!!!! She contacted a physician out of UCLA and he responded immediately. This doctor and the Clinic are now in communication and Saul will be scheduled for an evaluation and is slotted into the operating room schedule in two months in Lima when the team comes down.

So I have created a Saul fund to help get Saul and his mom to Lima. Checks can be sent to:
Saul Fund, Capitol City Medical Teams, 3275 Crestview Dr. S., Salem, OR 97302. To donate via Paypal, go to their website at www.ccMedicalTeams.org and go to the Donation page. Then click on the first donation button. Click on the blue circle with a ‘+’ on the inside to add additional information. Then type: ‘Recommended for Saul’.