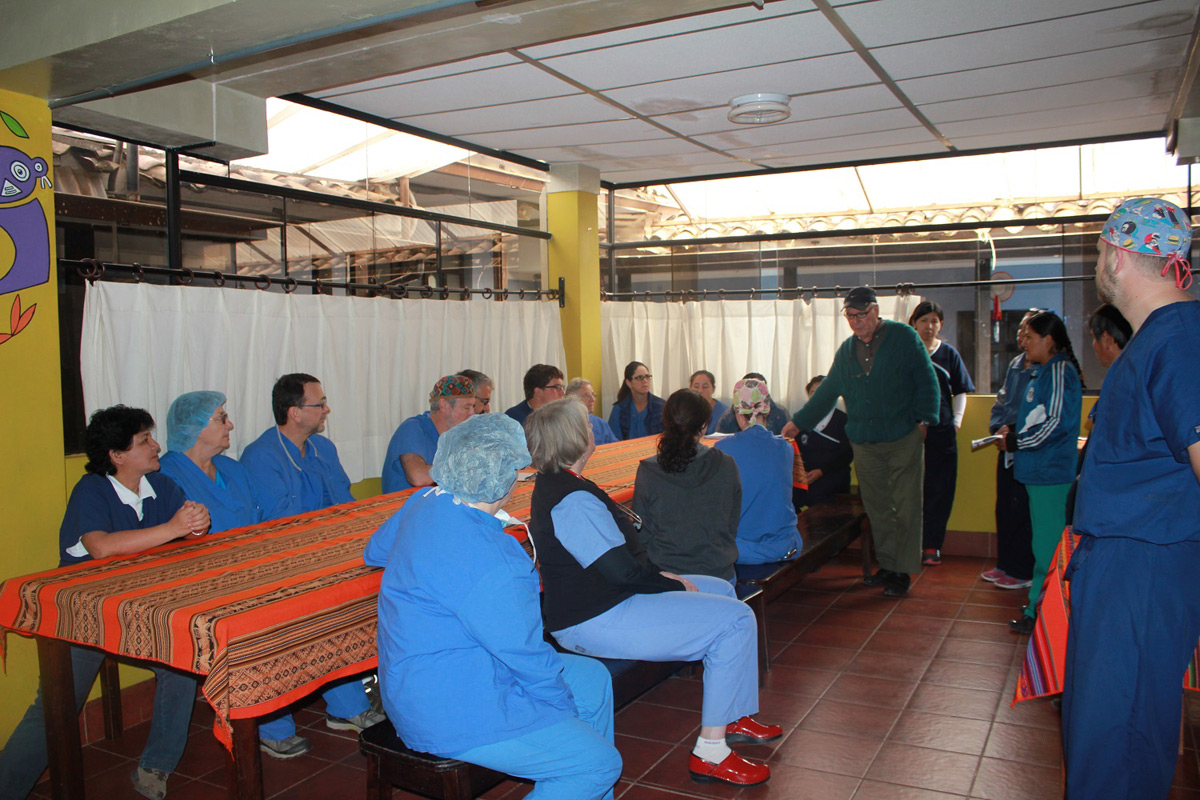 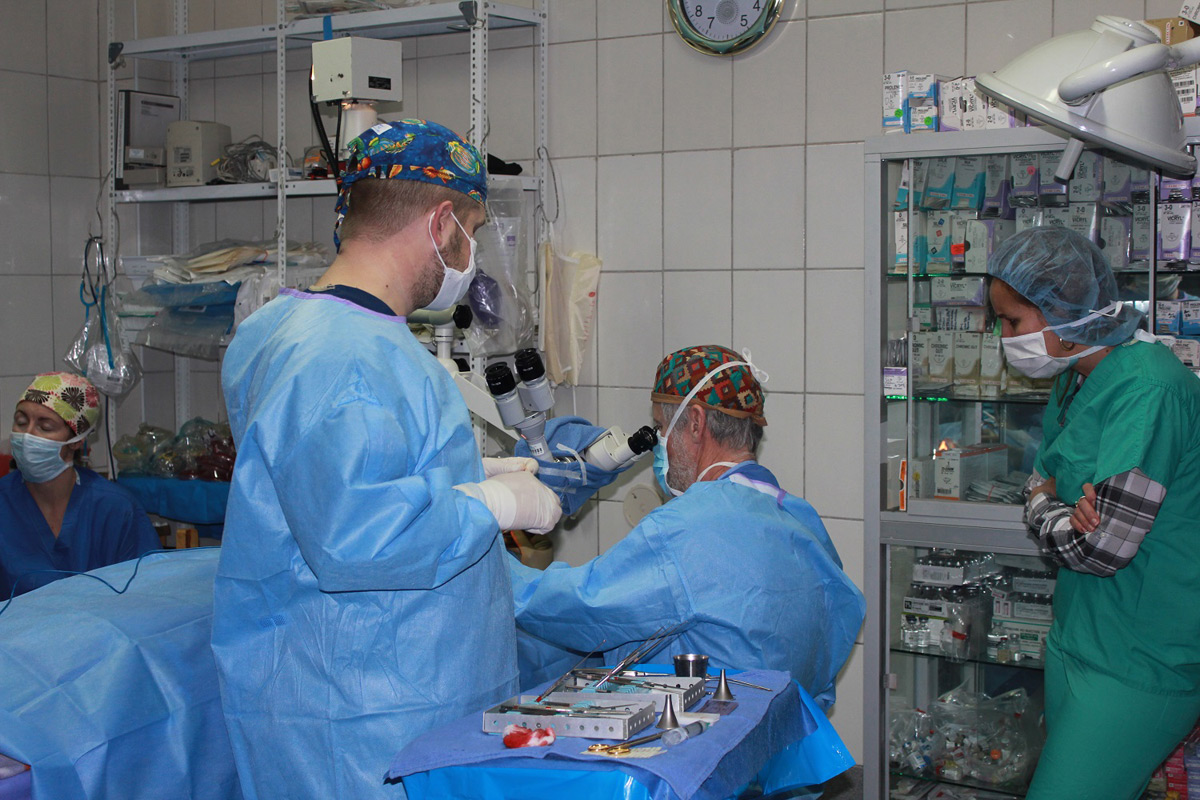 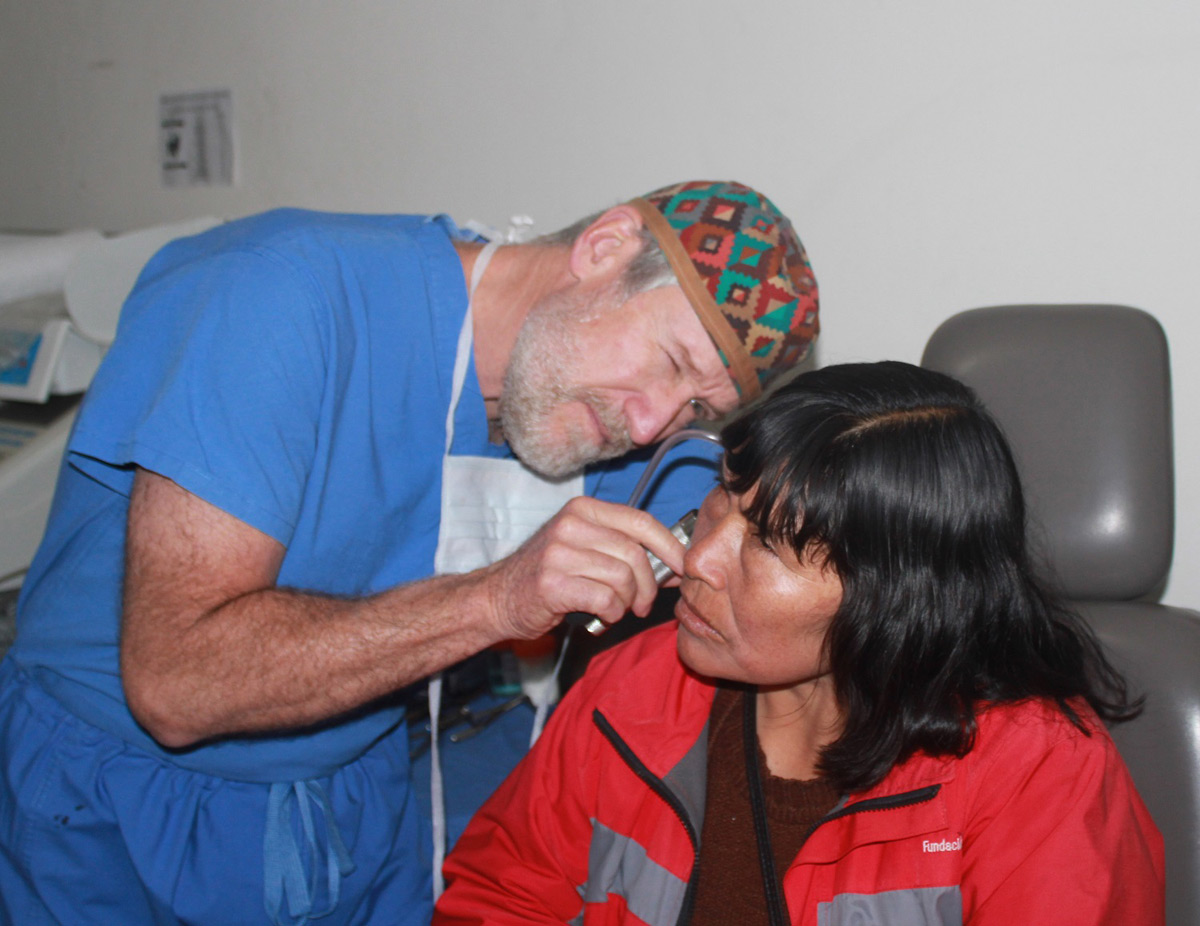 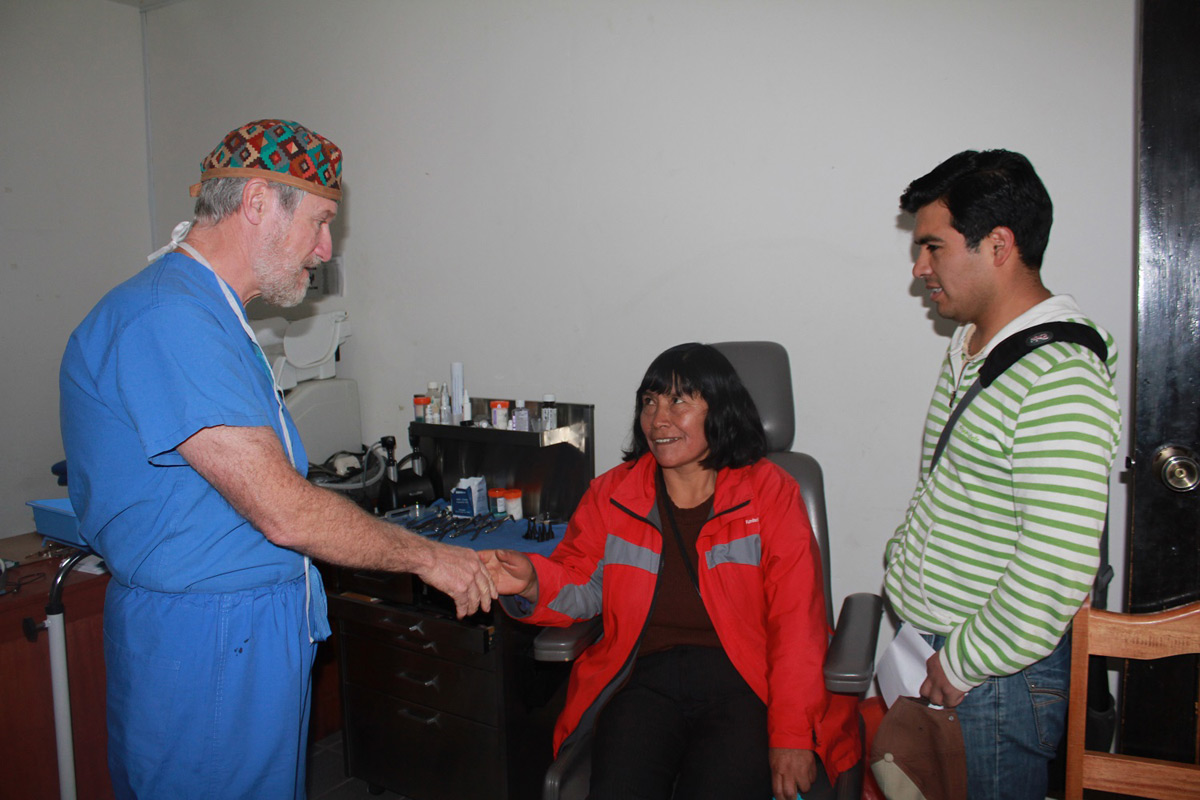 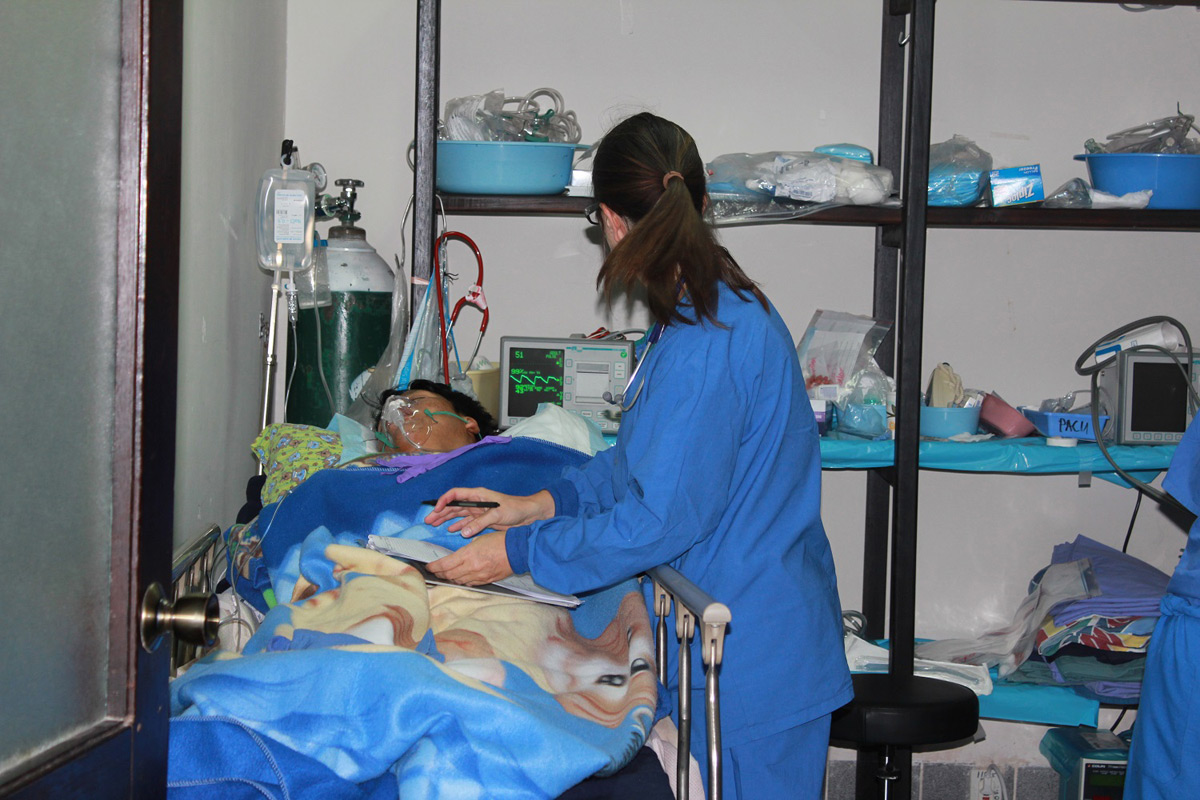 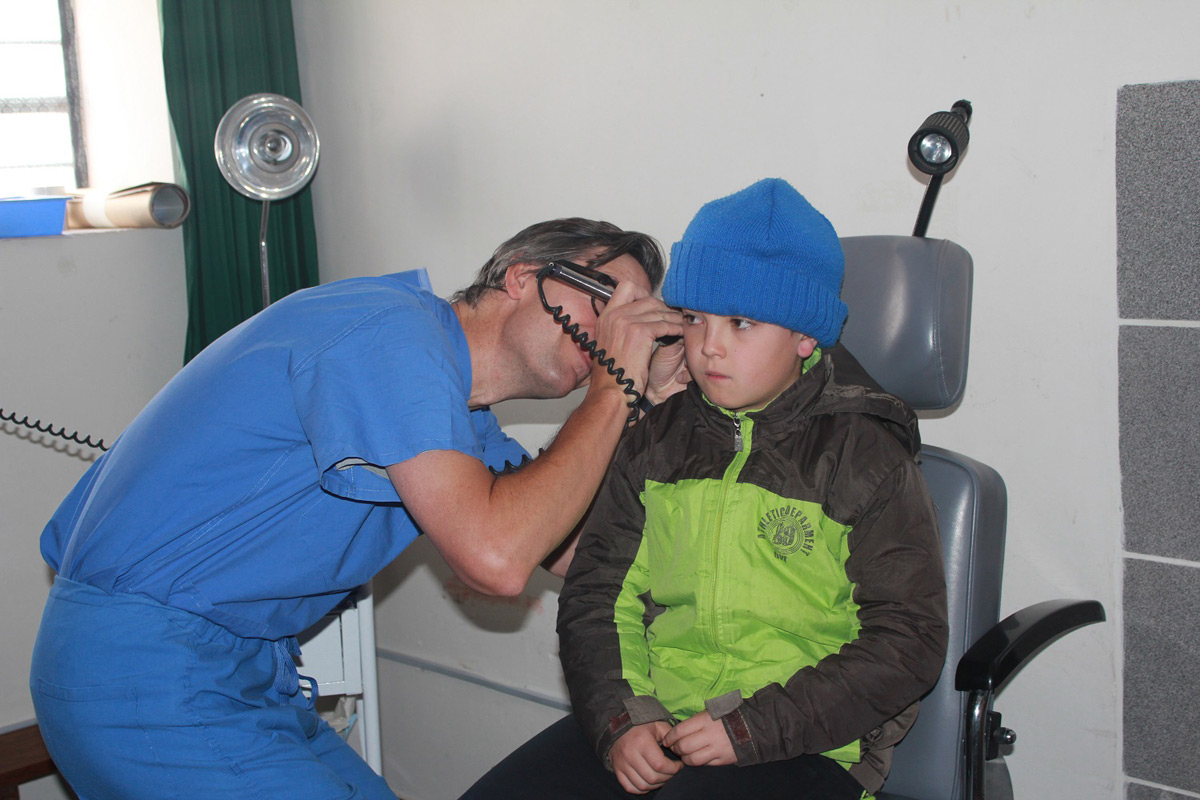 THURSDAY, SEPTEMBER 25, 2014
I came before the rest of the team to help prepare for the team and orient myself to Peru.

I arrived with no drama. However when most of the team followed on Saturday it was a different story. The team had every piece of luggage opened and had stuff confiscated. Peru customs looked at every expiration date even at stuff that was trivial. Then the team finally made it to the flight to Cuzco. When their jet attempted to land in Cuzco there were dangerous cross winds. And when they were almost ready to land, the pilot pulled up and took off and circled and tried again. The team safely landed not without a few racing heartbeats.

It is hard to believe that this is my tenth trip to Peru. Times are changing. The Lima airport went from a rather third world airport to a modern facility. One of the things that strikes me is how much cleaner Lima is than my first visit. In Cuzco I am amazed at the amount of construction. And here in Coya, the Kausay Wasi Clinic has out grown its space – a clear sign of the good work they do here. On my first visit here there was not a full roof and the second floor was only partially completed. Now there are three bustling floors of activity.

This evening I visited with Sandy and Guido the founders of the Clinic. Not only am I in awe of the tremendous work they do, but over the many trips a friendship has developed. So it was very nice to just hang out and visit. When we start seeing patients, it’s hard to find a free moment.

FRIDAY, SEPTEMBER 26, 2014
I had a lovely breakfast at the Coya Guesthouse – typical Peruvian fare: Mat� de coca tea, pan and avocado. As I walked across the plaza to the Clinic, I heard someone calling my name – an odd thing to happen. Lourdes, a Peruvian Sister of the Holy Names, is here doing parish work. She will join our team on Monday with Brigid Bauman, another nun. I had the honor of joining her last year at some of her projects in Lima. She is trying to offer some early childhood development classes and parenting classes.

Then I met Guido and two friends of his to drive up into the mountains to a very remote and poor village. They have raised money to buy a 15 passenger van to transport the kids of high school age to a regional high school. The village has a primary school, but the older kids cannot afford a taxi everyday so they have been dropping out of school.

When we arrived, we were greeted and escorted up to the soccer pitch where the village had assembled. The kids were lined up to dance and sing. The elders and school official gathered. This was to honor Guido and Carlos for helping the village. I wanted to go sit on the sidelines away from the limelight, but no I also became an honored guest. Guido introduced me as a nurse from the United States. The women of the village processed up and sprinkled confetti over our heads – a ritual of welcome. Then the kids sang the national anthem. There were 4 or 5 different performances, then some speeches. Guido in a reciprocal act played the accordion which prompted the older kids to come over and ask us to dance. Lordy Lordy and not even with the benefit of alcohol. There was no declining to be had. Then they presented us with these beautiful handmade scarves. I thought we were done, but no. We were accompanied up to the library where we were to be fed an “organic” “farm to table meal” – 1/2 a cui, a whole trout, three potatoes, and Coke A Cola. Oh, did I mention there were no utensils or that cui is guinea pig?

This feast was then followed by a wild ride down the mountain. The taxi driver was taking a short cut. The road was like an over grown cow path. The cows did not want to share the road with our vehicle. In fact when the driver honked the horn at a cow, it turned around and squared off and stared at us. Also imagine “S” curve turns. There were as many where you cannot see where the road was going. It looked like you will fly off the road into the air. I closed my eyes, held on, and prayed that I would not lose my life on a road in the Andes.

Phew, I got another day.

When I returned to the Clinic, I was then met by Meri Paz and Apo and their new baby Eduardo – oh so stinkin’ cute!!!

SUNDAY, SEPTEMBER 28, 2014
I had a quiet morning strolling around the village. Then I went to Pisac with some colleagues. The market is a bit smaller than on Sunday, and very quiet and relaxed. I did some shopping for friends. I went to my favorite baker for an empanada – yum. The oven is 12 feet wide and six feet high!

Coming back on the bus we noticed that there was a fire going up the hillside where we had driven yesterday. Nothing to be alarmed about I was told.

I came back in time for the team to arrive in Coya. We did some set up then retreated to the Guesthouse for a team meeting and dinner.

Most of us went to bed by 9:30-10:00 PM – just in time for the earthquake outside Cusco. Apparently it was a 4.9. Later we learned there were 9 fatalities and 4 people missing. There was no damage to the village we are in.

The team headed in to Pisac for dinner to a fun pizza place. We took over the whole restaurant. Lots of laughs, a good team.

TUESDAY, SEPTEMBER 30, 2014
Well, today was a testimony to the experience of our team. This was the best first day of any mission trip. While we only did 5 cases, everything went without a hitch. I have confidence that even if there was an issue, this team would respond flawlessly.

We all headed into Pisac for dinner. Our original destination did not open until 8:00 PM so we ended up at the Pisac Inn. The waitress was incredible. Waiting on 17 folks is a hard act. Those who were served first were done by the time the last got served, but it was not a problem.

Once again one of my favorite things is squishing on the public bus and literally rubbing elbows with the locals. I had a seat to start, but gave it up to a se�ora. So I sat shot gun with the driver. It was not reassuring. I’d rather not see how fast they go. Kate hooked me up with some Benadryl which afforded me my first full night’s sleep.

The Peruvian election is next Sunday so EVERY night there are loud political parties until late into the night. And then there are the dogs. There is a threat of darting all the neighborhood dogs with Ketamine.

This trip has been an adventure. The rough landing, the thorough customs search and the 4.9 earthquake. Not an over the top huge quake, but enough to wake us from our sleep. We also had team members coming down with traveler’s dysentery. One team member was vomiting and running a heart rate of 44. Probably a vasovagal response. Then another person got seriously sick. We thought she might need to be med-evacuated out. She dropped her oxygen saturation to 49 and was cyanotic. It was very scary. She spent 24 hours on oxygen and was administered an IV. Finally she was well enough to make the trip to Cuzco for a blood test to rule out a pulmonary embolism. Lucky it was negative. We may never know what happened. A few more folks needed antibiotics and IV’s.

Then we departed for Cuzco. We stuffed 11 into a van along with 13 large trunks and 11 personal bags. It was quite the sight.

We arrive in Cuzco, checked in and awaited our flight to Lima. We learned that the flight was canceled. Half of the team got on an early flight. The other half of us had to wait two hours for the next flight. Such is the way of travel in developing countries.

The good news is our team probably saw over 240 patients and completed 26 surgeries and the patients all did well.

Needless to say we are all looking forward to getting home and are grateful for working with a wonderful team. Despite some of the difficulties, we all realize how fortunate we are to come to this magical place and serve others.