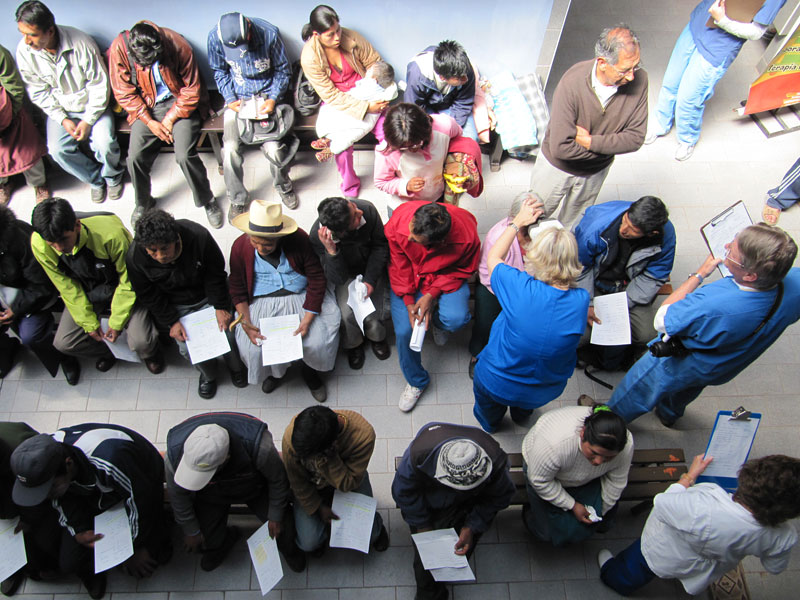 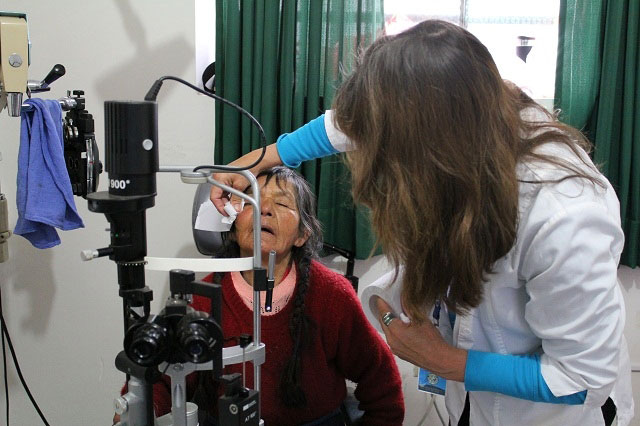 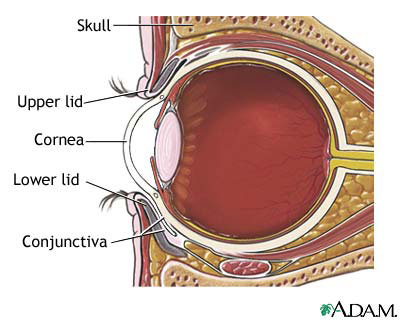 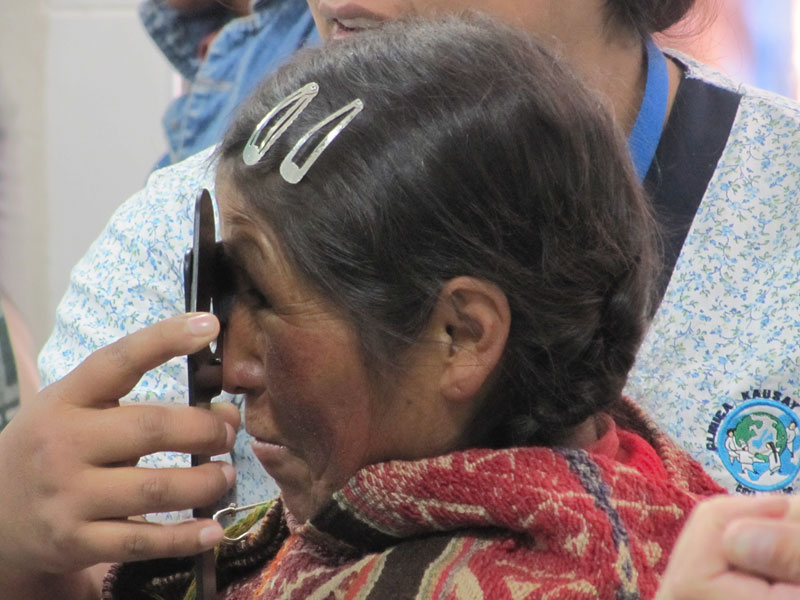 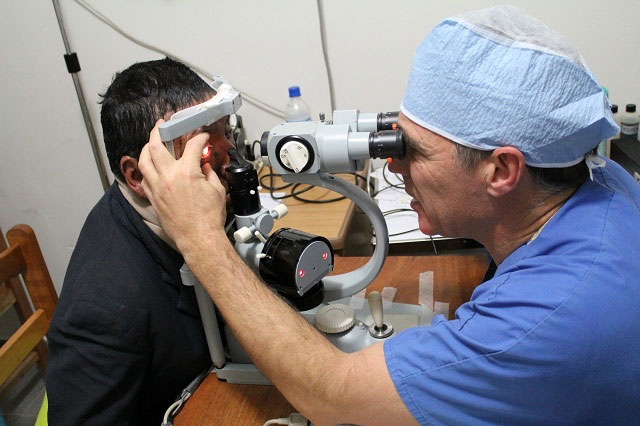 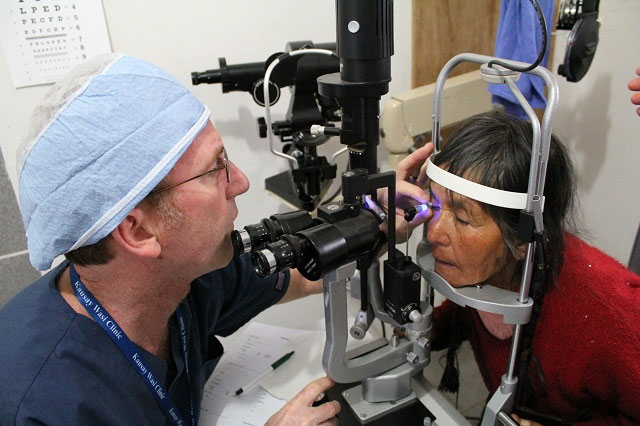 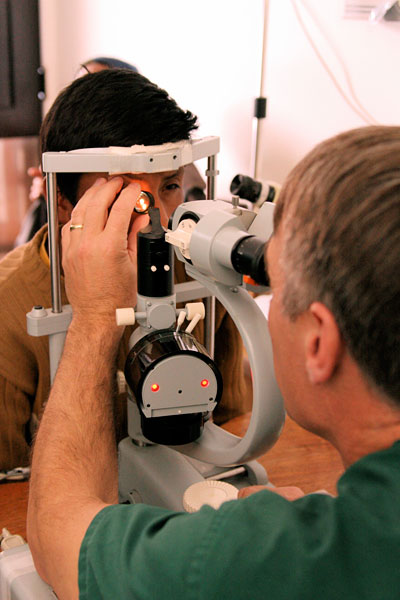 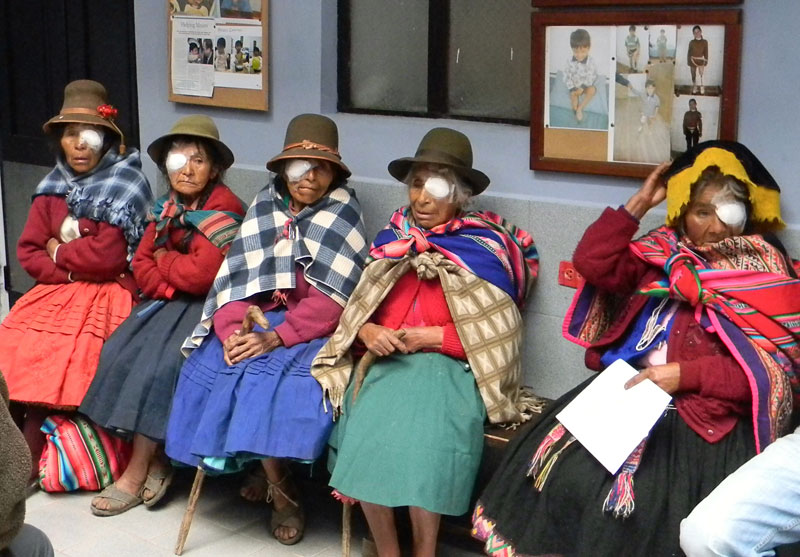 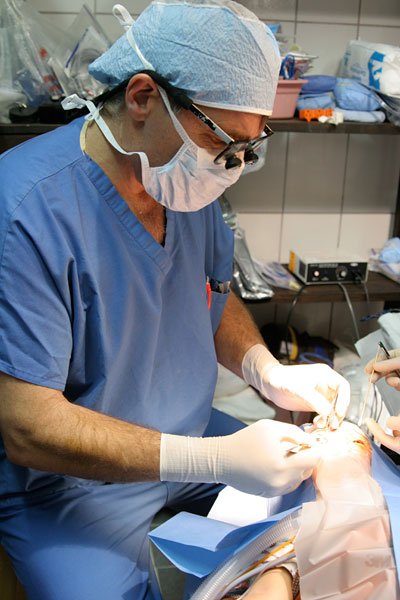 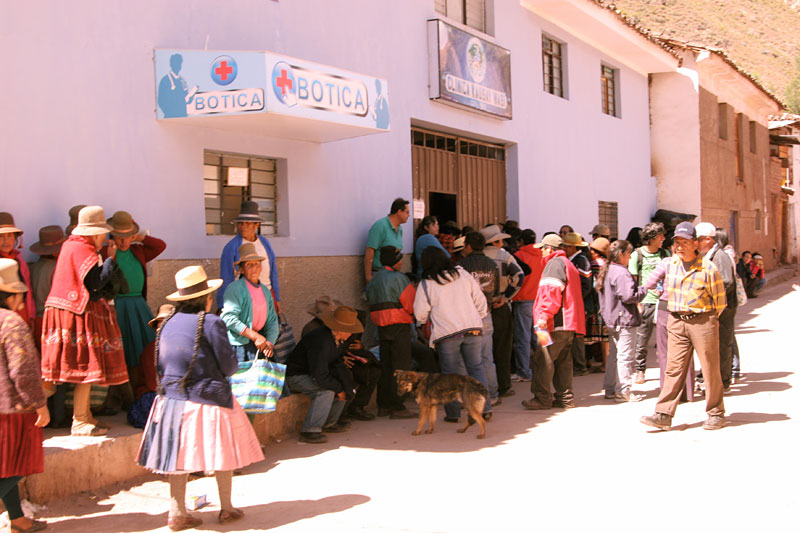 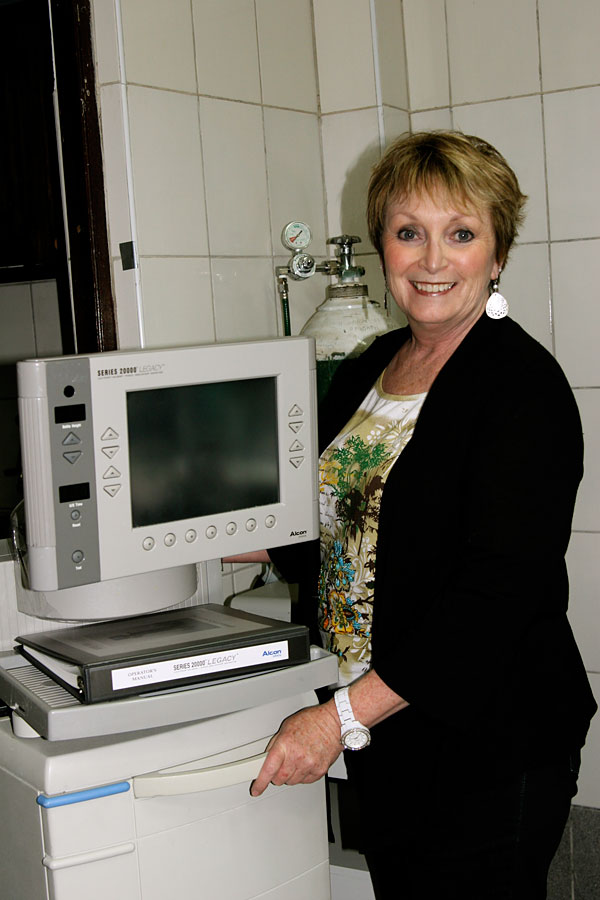 On our last trip in September, 2010 we only took five team members. This time we took a team of 15 people including two surgeons, an endocrinologist, a physician’s assistant, and a nurse anesthetist.

Our larger team allowed us to perform strabismus surgery and general anesthesia for pediatric cataract surgery – something that I have found exceedingly rewarding. Throughout the week we did about 45 cataract surgeries and a dozen strabismus surgeries. Several of the cataracts were on young children of six and seven and multiple pterygia were also done. (Pterygia is an operation to remove a non-cancerous growth of the clear thin tissue called conjunctiva that lays over the white part of the eye (sclera). Pterygia are more common in people with excess outdoor exposure to sunlight and wind. It is more common in people near the equator.)

We started the week off on Sunday and saw about 120 patients on day one. (It never ceases to amaze me how well we are received in Peru. People will stand in line for eight hours waiting to be seen.) We went on to see over 300 patients during the course of the week, performing multiple surgeries as necessary and referring others. The gamut of problems ranged from dry eyes to a 12 cm abdominal aortic aneurysm, with just about everything else in between.

Probably the most rewarding case of the week was a young five-year-old girl with bilateral opaque cataracts who had absolutely no visual response other than a little eccentric fixation of the light. Taking that patch off the next day and watching her quizzical looks as she spotted things and tried to reach for them for the first time in years was just unbelievable! Her parents were in tears. Most of the rest of us were nearly there too. It is just unbelievably rewarding to make such a huge difference and be so immediate.

Other highlights of the trip include Cathy Theen, a nurse who is just a great personality. Throughout the trip she would turn to me and say, “Wow! This is the best vacation I’ve ever taken”, as she is working her tail off until seven o’clock every night. It was just amazing.

On this trip we managed to take about one-half dozen artificial limbs courtesy of a wonderful hero of the U.S. named Jim Maza. He has been donating these limbs to us for quite some time. Unfortunately Jim passed away about eight weeks ago, but his legacy will live on. The artificial limbs we take down consistently to the prosthetic lab in Peru are put to very good use. Of that we are very proud.

Finally, through the generosity of Dr. Dan Benson, M.D., an ophthalmologist in Klamath Falls, who donated a Legacy phacoemulsification machine, we were able to do a dozen clear corneal phacoemulsifications. It took a significant effort to get the machine down to Peru. With Guido Del Prado’s, co-founder of the Kausay Wasi Clinic, help, we managed to unite it with the hand pieces, cartridges and cassettes, and get it working. The advantage of this apparatus is just incalculable. These people are seeing great on day one rather than waiting for the cornea to clear over the first week. The endophthalmitis risk goes down significantly and just adds a new avenue that we can precede on cataract surgery in the future. It will take some maintenance to keep this machine up and operating, but Justino of the Clinic staff is amazing. I think we can get him to reconfigure a tow truck to do cataract extractions if we set him on it and gave him a whole weekend to work by himself!

As usual, it was a sad time when we left and certainly we look forward to going back. That will happen over the next 12-15 months again. An exceptionally great adventure!