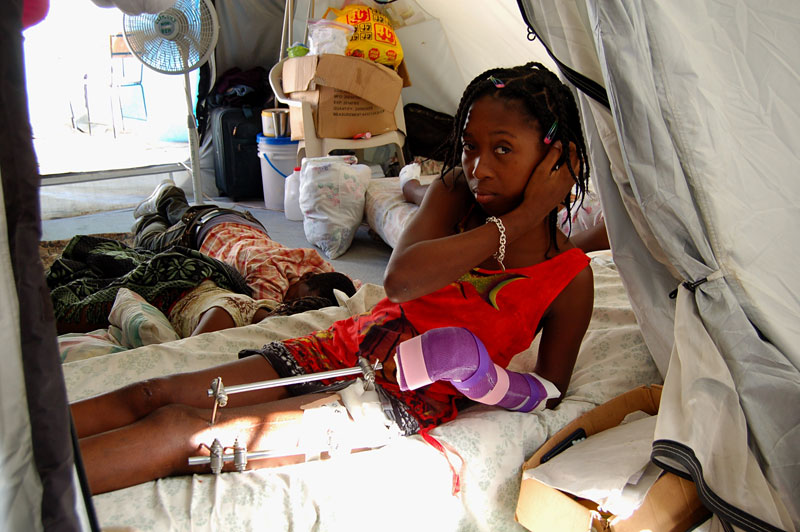 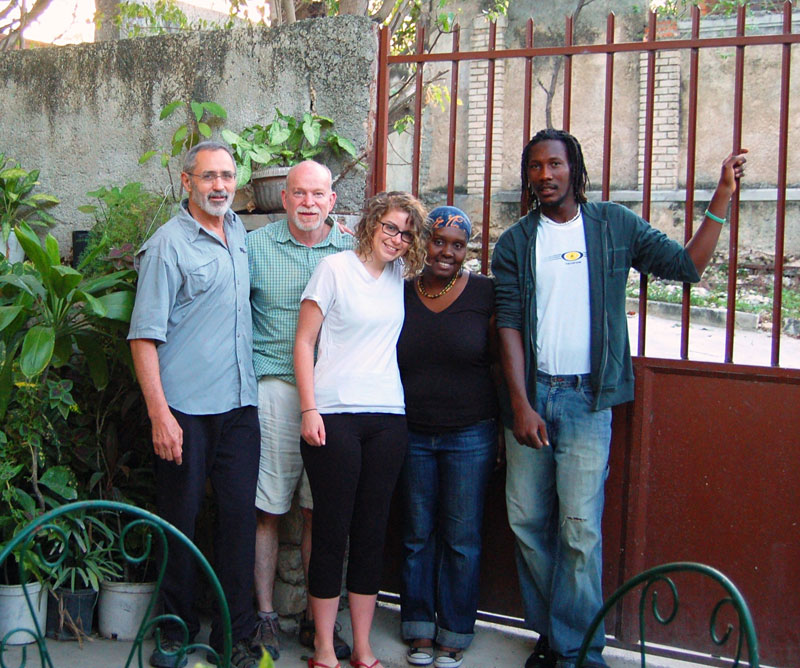 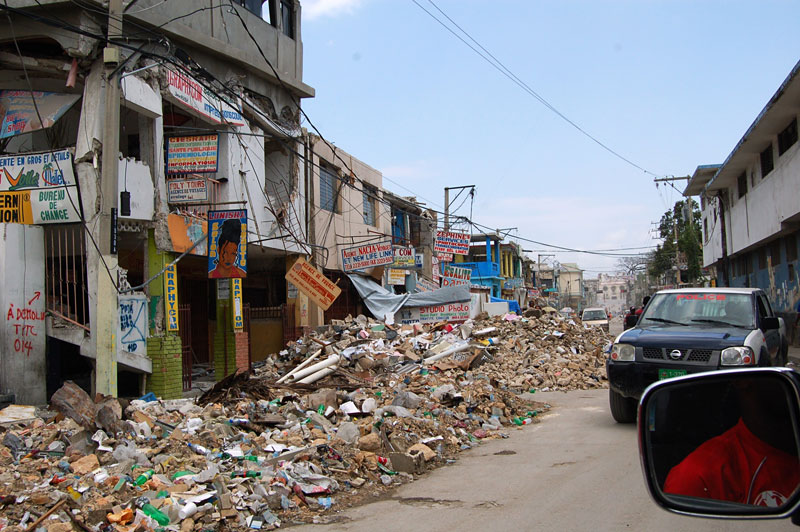 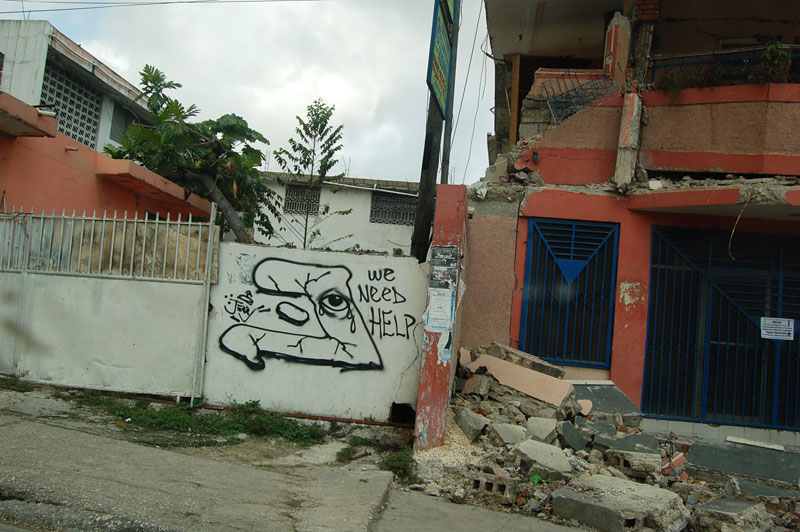 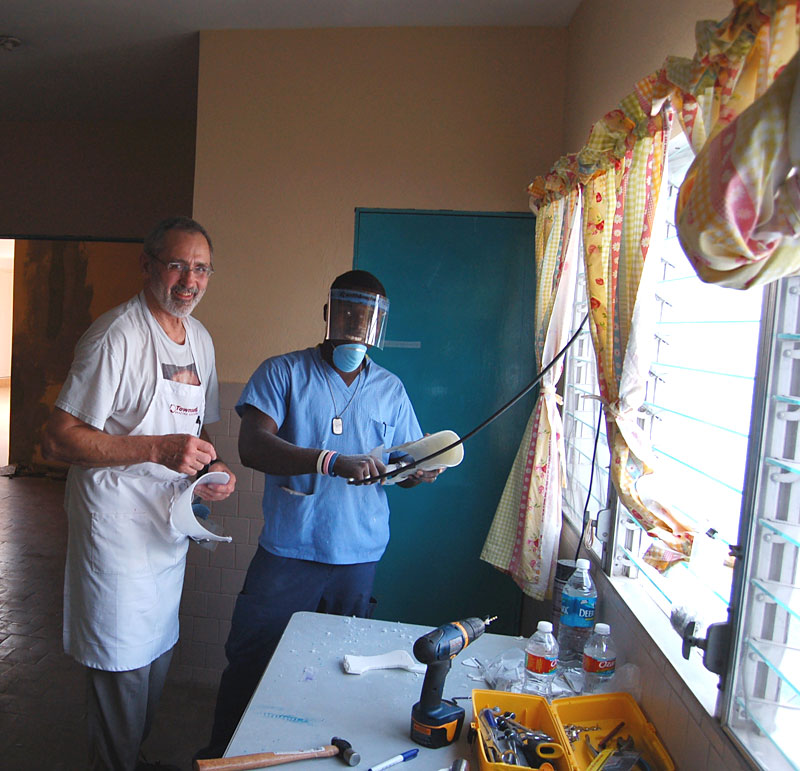 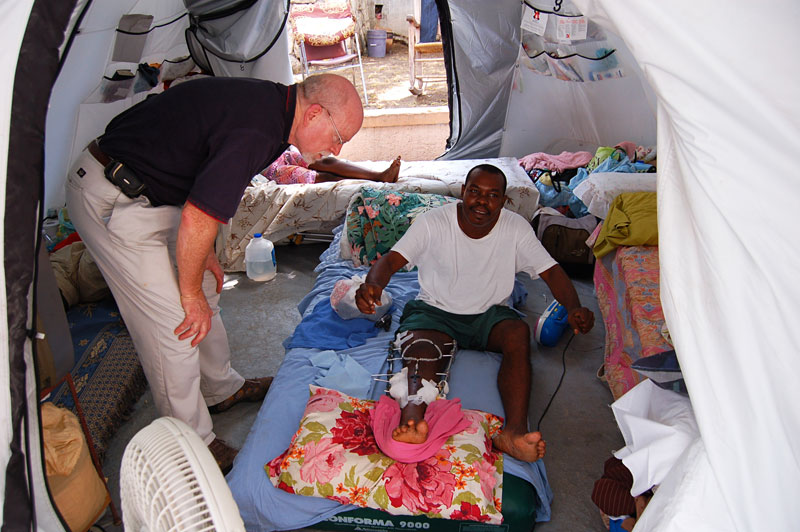 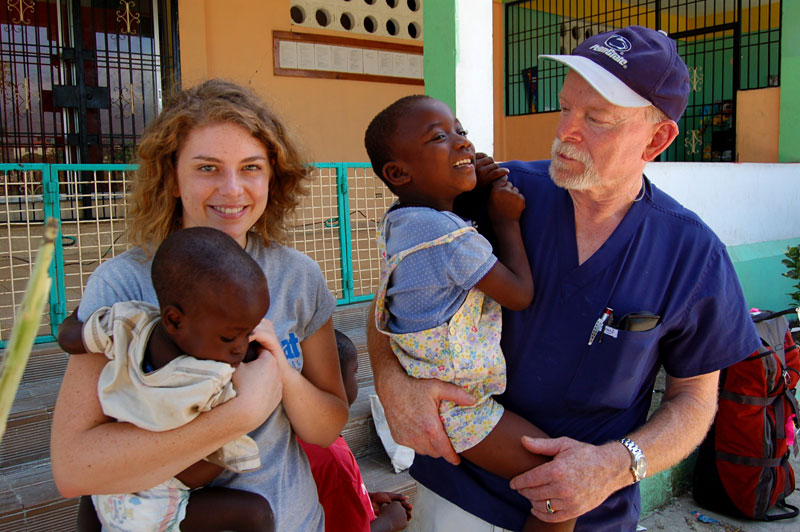 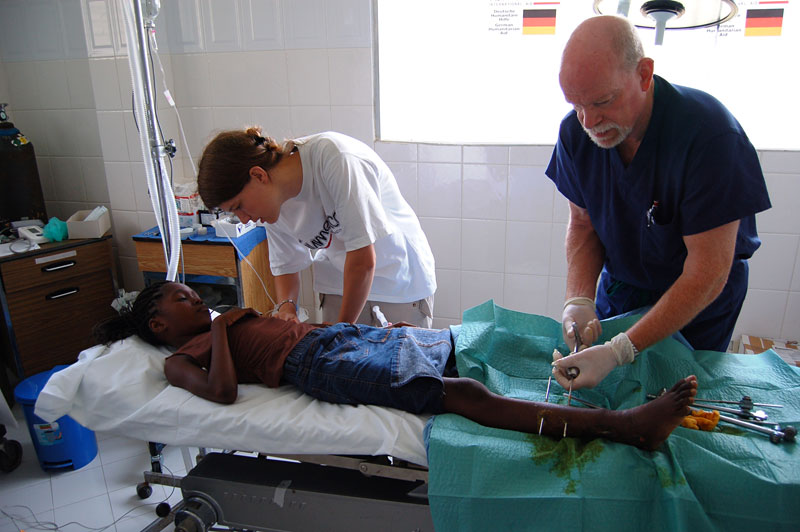 Narrative:
Dr. Van Patten was in Haiti a week after the earthquake and he operated on several patients. Several of them required external fixation of their severe thigh fractures. So, he needed to return to Haiti to check-up on his patients and remove the external fixators. This trip’s purpose was to continue the care from the first trip and to remove the external fixators and replace them with fracture braces to allow the patients to walk again. It was also to do wound care for those that needed it. The team also put stump shrinkers on amputees for preparation of a future prosthesis.

Our team arrived at the John F. Kennedy International airport in New York City on Saturday, March 13th. Unfortunately there were 60-70 mph winds and all flights were in disarray. Our flight to Haiti kept getting rescheduled an hour later than previously scheduled several times. We were eventually put up in a hotel which we were thankful to get considering many others were waiting in the hotel lobby for a room to become available. The strong winds continued that night and even blew-in the hotel’s revolving door.

On Sunday, our first attempt to leave failed because the airplane had equipment problems. Our second flight was also canceled. This time the reason given was that it was too late in the day to leave because we would arrive at Haiti in the dark and all flights had to arrive in daylight. Needless to say it was a long day at the airport. However, I would like to thank the staff of American Airlines for their hard work during this experience. They made sure we got seats on the next flight, stuck around after their shifts ended, called personally from their cell phones to check on our team when they were off duty, and even showed up to see us off the next morning.

On Monday we left JFK at 7:30 AM. (I was beginning to wonder, but God is faithful and never lets willing laborers stand around too long when there’s work to be done.) We learned a needed lesson in patience and actually had a couple of opportunities to rest before we arrived in Port-au-Prince.

Our team arrived in Haiti on Monday morning and after two hours of searching, managed to retrieve all our baggage from the mountain of luggage piled into a hanger near the runway. The usual baggage system was destroyed in the earthquake, and we literally had to “sift” through hundreds of black rolling bags (next time I’m spray painting mine PINK!) all the while competing with our fellow passengers for maneuvering room. Again patience! It’s not about me.

We were met by Sonny, the driver for Gladys, the Hospital Espoir (“Hospital of Hope”) administrator, and driven to the hospital over “streets” that often required waiting for oncoming traffic to “tip toe” past huge potholes and piles of rubble in the streets. I’m not sure how much of the rubble was due to the earthquake/building rubble, but much of the journey was literally a four wheeling adventure.

Port-au-Prince was a MESS, as you would expect. There was no pattern to the destruction – large buildings in a pile of rubble standing right next to a ramshackle building without a scratch. It looked like about 1/3 of the city was down, 1/3 was undamaged, and 1/3 sustained some degree of damage. Thousands of tents were erected in “tent neighborhoods” throughout the city. Bulldozers had just scraped away rubble from flat areas to provide space to erect the tents side by side, hundreds at a time.

I don’t think I was prepared for what I saw in the Haitian people. I assumed they would be subdued or fearful, maybe just tired. Actually, they turned out to be apparently happy, completely without pretence or inhibition socially, and very direct in their relationships (even with strangers like us). I was also surprised to find so many Christians in our little corner of Port-au-Prince. I had always heard that Voodoo and spiritist religions were practiced in Haiti, but I met many very bold and enthusiastic believers during our short stay.

When we arrived, Gladys took us on a short tour of the hospital and grounds, and introduced us to the team from Humedica, a German medical/humanitarian group that had been working there for several weeks. The patients were living outdoors in family sized tents, which filled the large courtyard in front of the hospital building. They came into the hospital to be seen in clinic or for surgical procedures, but lived in the tents out of concerns about aftershocks. We learned that Gladys had pioneered not only the children’s hospital, but two orphanages as well. While Dr. Van Patten (“Pete”) and I worked alongside the Humedica team with orthopedic patients at the hospital, Kaitlin (Dr. Van Patten’s daughter) would love on the kids from the orphanages during our time in Port-au-Prince.

Many of the patients we treated were the very ones Pete had operated on during his last trip four weeks earlier. Most had severe femoral (thigh) fractures which required stainless steel rods to be placed into their thighbones, extending through the skin and held within a metal framework outside their limb to maintain alignment of the bones until they began to heal well enough to apply a fracture brace. Pete’s job was to determine whether such healing had progressed far enough and to remove the “external fixators” under anesthesia. My job was to fabricate and pre-fit a fracture brace in the OR, complete it in a small workshop down the hallway, and fit the brace to the patient in their tent. We did four the first afternoon at the hospital. A young Haitian man (“Rodner”) took an interest in learning a new skill and faithfully helped me fabricate the braces during our entire visit. Over the next few days, we fitted eight more plus several other hand and leg braces. About half our patients were adults and half children…all survived in good spirits.

After work, we were taken to a large private residence about 15 minutes away from the hospital, where we stayed each night with a Haitian couple named Jenny & Eugene. Although there was no running water (we drew from a cistern) and very sporadic electrical power (minutes of availability…9PM, 3AM, whenever…), the food was good and the fellowship was awesome. We had long talks in the evenings while sitting in rocking chairs on the 2nd floor “deck” trying to cool off in the breeze. Bathing was, well….”hit or miss”. We had 5 gallon buckets of cistern water and a plastic peanut butter jar with which to pour the water over our heads, in the dark, sometimes, by candle light for 8 days. Yes, we did have a towel! You don’t want to know about the toilet procedures. Really, with all that it was a wonderful a little uncomfortable and inconvenient) time with Jenny & Eugene.

The last day was spent visiting the orphanage following up with our patients from the week, and saying our goodbyes to the staff at the hospital as well as our German coworkers. We woke up at 2:30 AM on our departure day by a firefight taking place a block or two away. It reminded Guy of his time in Vietnam in 1968. It stopped after about 30 rounds and everyone went back to sleep until our 6:00 AM departure for the airport.

The trip back was uneventful. It was good to get back to the conveniences of life in the US…but I do miss the simplicity and honesty of the people in Haiti. Especially when I consider how self-serving, spoiled, and soft we’re becoming as a culture. I wonder which of us is poorer…

We offer a big thank you to our faithful supporters and their soft hearts.