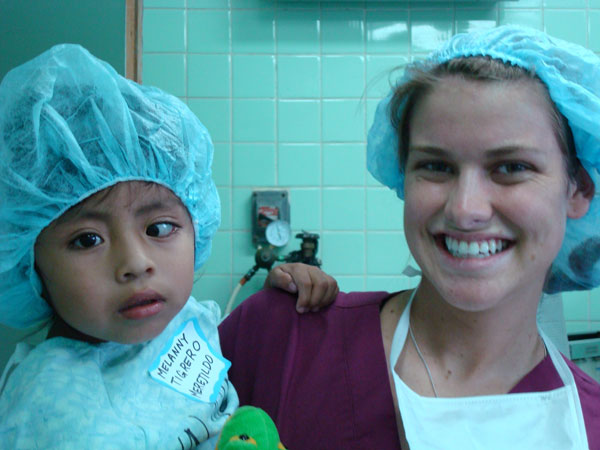 Campaign Summary: More than 500 children were triaged and almost 200 surgical procedures were completed on 120 children. About 70 sets of braces were fitted, as well as three sets of lower extremity prosthetics. More than 70 children received some type of physical or occupational therapy. 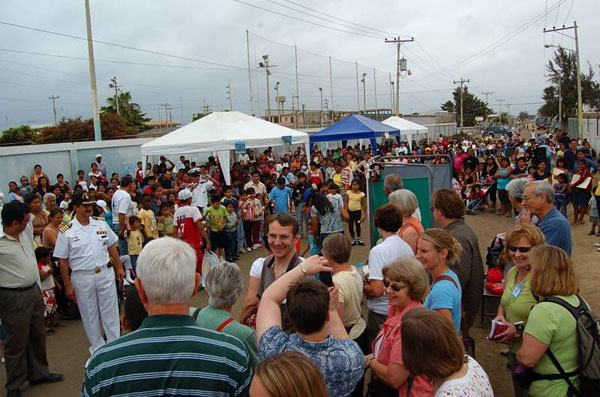 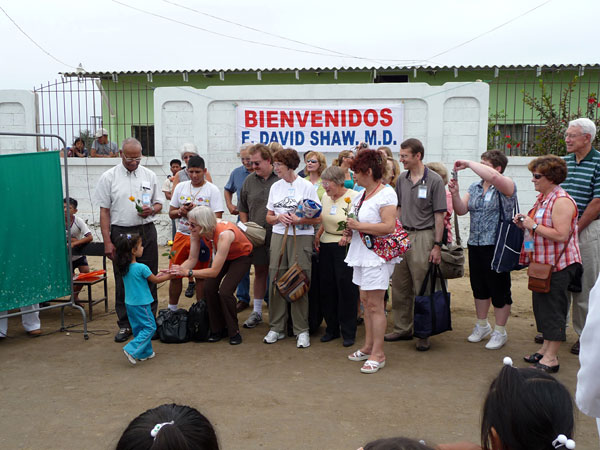 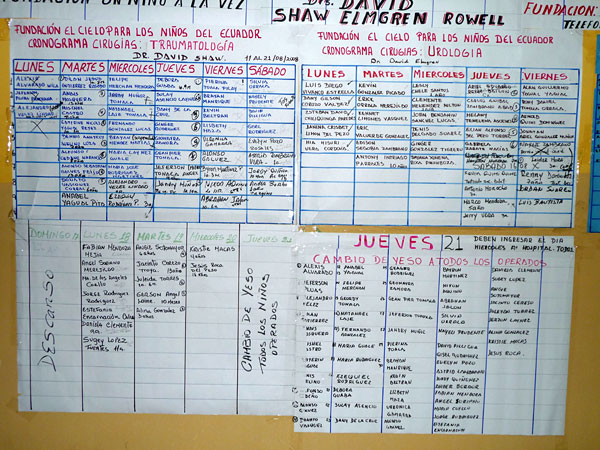 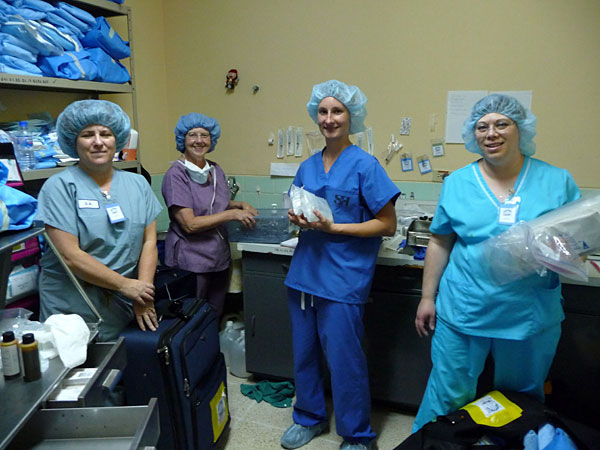 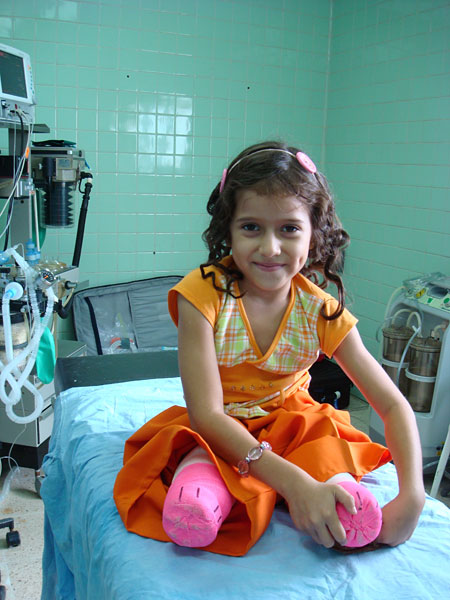 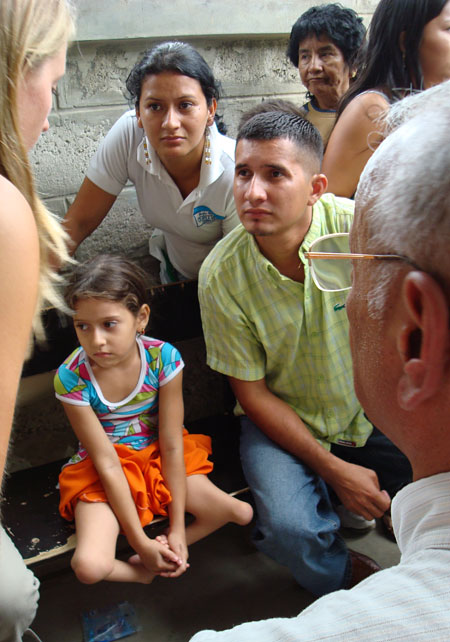 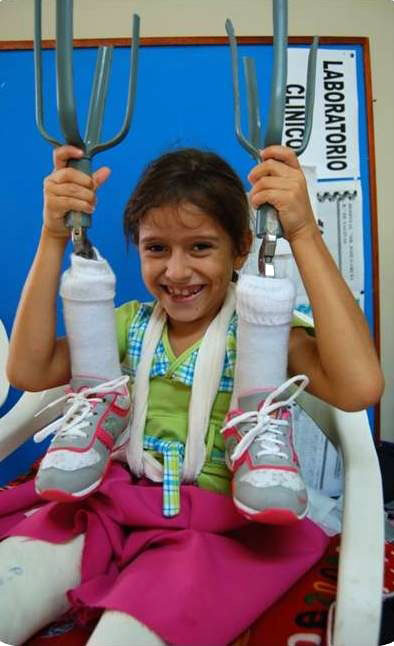 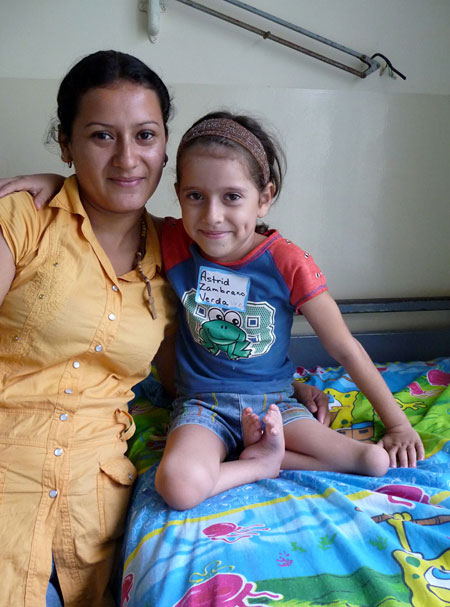 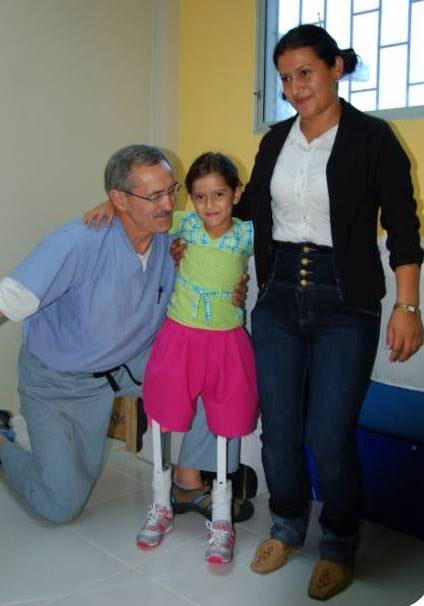 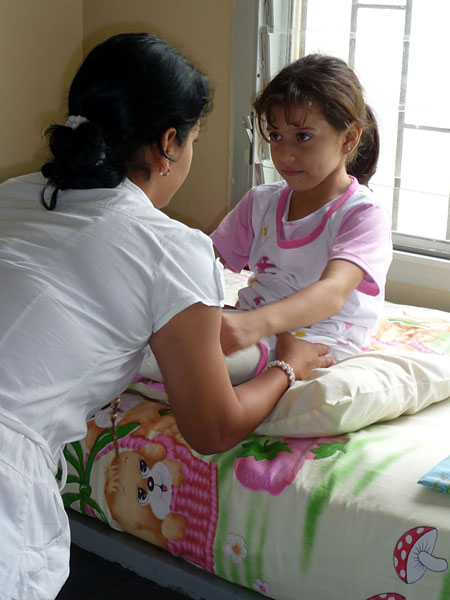 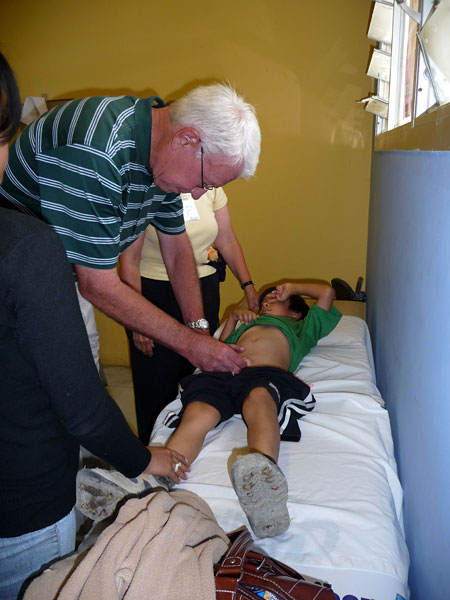 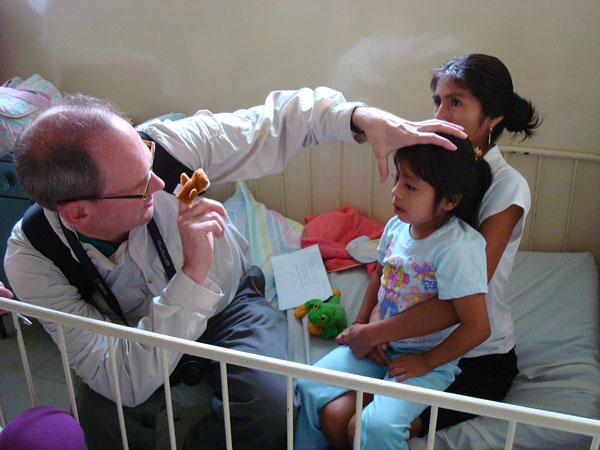 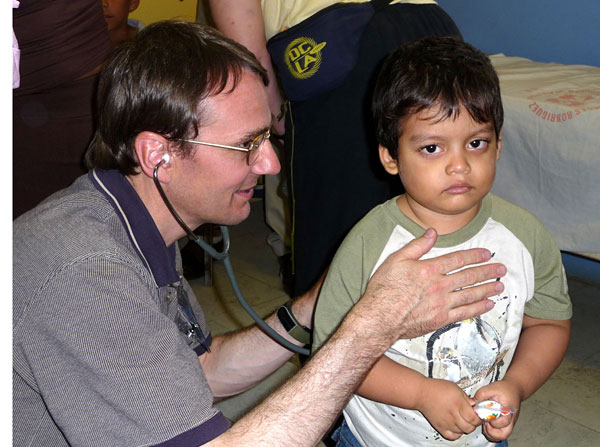 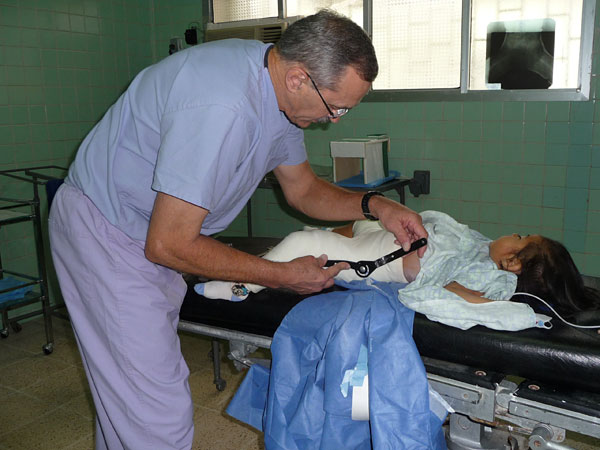 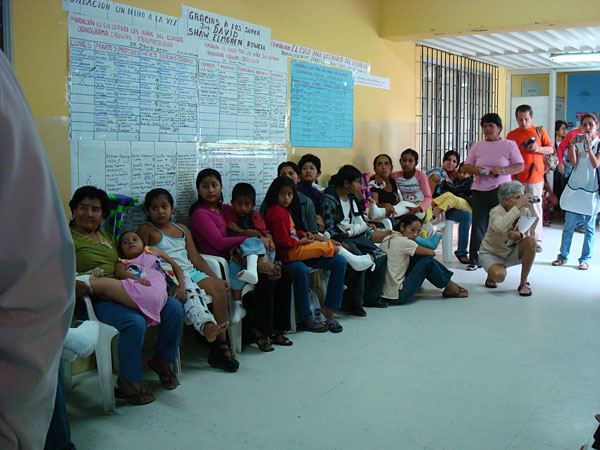 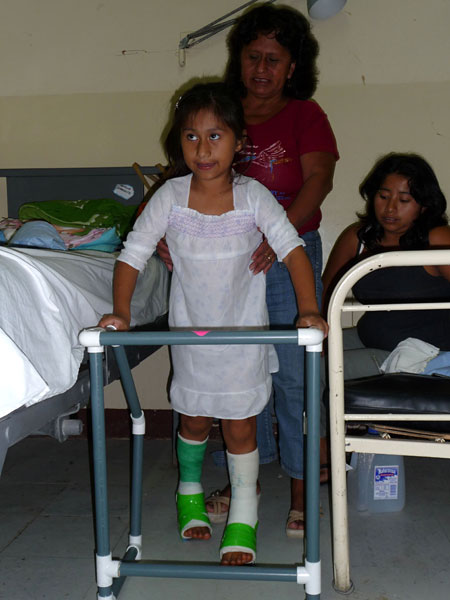 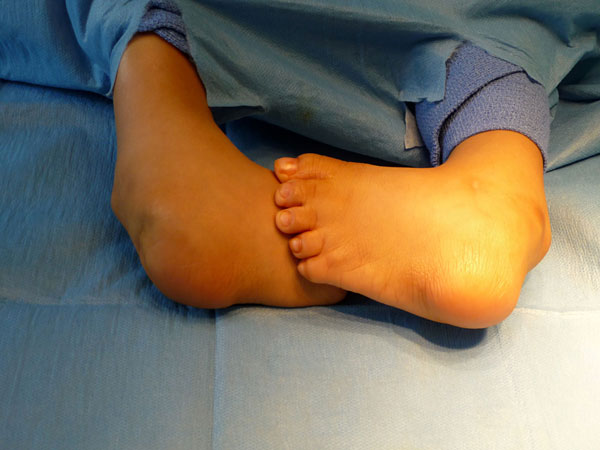 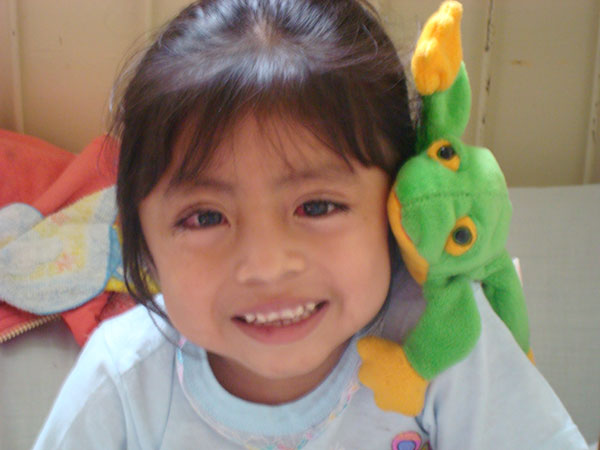 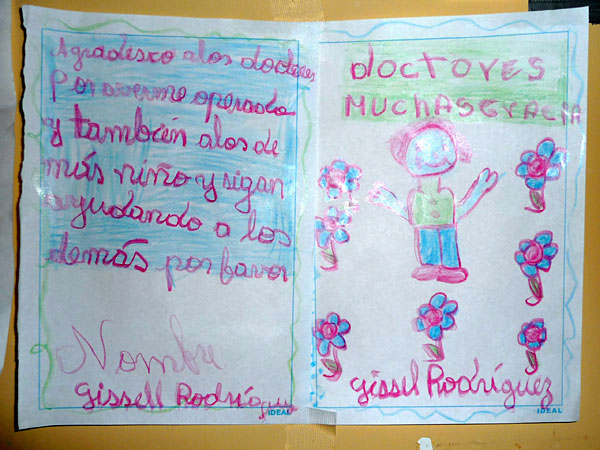 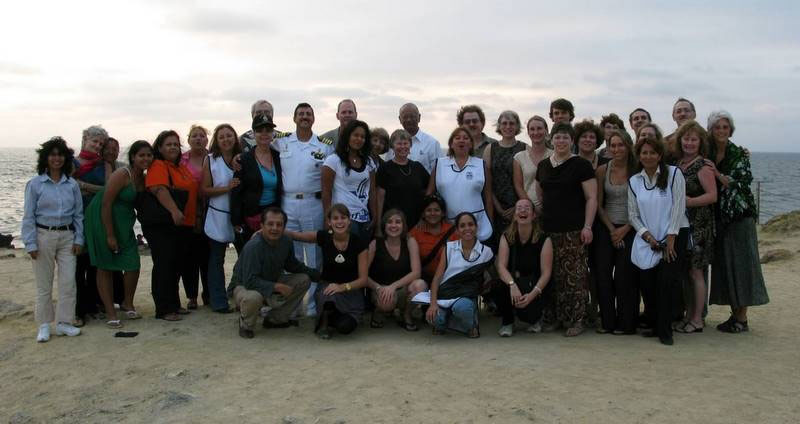 Narrative:
Dr. Shaw wanted to lead another medical trip to Ecuador in the summer of 2008. He contacted Dr. Zorayda Figueroa and her foundation, Cielo Para Los Ni�os Del Ecuador (Heaven for the Children of Ecuador). She in turn talked with Mrs. Mano Salvas, a manager at the Oro Verde Hotel in Guayaquil, who had arranged lodging for several of Dr. Figueroa’s previous visiting medical teams. She and Captain Julio Arias of the Ecuadorian Navy, were interested in having a medical team work in the new province of St. Elena. (The St. Elena Province had been a part of the Guayaquil Province up until a 2006.) A $70,000 grant was secured from the national government for the Dr. Jose Garces Rodriguez Hospital of Salinas to upgrade it with new therapy rooms, several other physical improvements, and medical supplies. The hospital personnel and the Women’s Auxiliary from the Salinas Naval School began searching for children who could benefit from our team’s visit. The Foundation, Cielo Para Los Ni�os, began running advertisements in newspapers about our team’s mission. We had no idea how successful they would be! So, our team ended up going to the southern seaport town of Salinas. It is about a two hour drive by bus from Guayaquil. With our final destination arranged, it was time to get ready.

Due to high fuel prices, the airlines limited checked baggage to one article per person and charge $25 for any extra baggage. Since almost all of our supplies are packed into suitcases and taken with us, we had a problem. We decided to replace our heavy worn suitcases with light duffle bags to decrease weight and save money. This idea worked well until we arrived at the airport. We learned that although our bags were exactly at 50 pounds, the maximum we could have without getting an extra fee, our duffle bags were too long. We quickly decided on a simple solution: turn the bags on their sides and squish them down to decrease their length. Either the airlines thought this was an acceptable solution or they took pity on us and accepted our baggage. This solution worked for most of our bags, but some were not compressible because they were so full. We had to buy new bags, which were conveniently on sale at the ticket counter, and repacked some of them. We still had too many bags and had to pay $25 for our extra luggage.

While at the airport another problem occurred. One team member was told she couldn’t go on the trip because her passport was going to expire within five months of the trip. She hadn’t planned on extending her trip and had already bought her return ticket on the same airlines, but apparently there is some immigration policy that says passports must be valid for 6 months after your scheduled departure date from Ecuador. So, what’s an expiration date if it’s not the expiration date? Oh well, the airline ticket attendant called the immigration office in Guayaquil, Ecuador to ask for permission, but they said no. The airlines attendant was persistent, told them the nature of our trip, and the Ecuadorian official changed his/her mind and our team member was able to go. Moral of the story: Make sure your passport is valid for at least 6 months after your scheduled departure from the foreign country you’re visiting.

We eventually flew to Houston, made our connecting flight just in time and arrived in Guayaquil around midnight minus one of Dr. Shaw’s checked in bags that contained his surgical supplies. Was his bag too long and not allowed on the plane? Was the airline getting revenge upon us for the difficulty we created at the airport? No, it was just not on the plane and it arrived the next day. We spent the night in the Oro Verde Hotel, had a great breakfast there, and were off on a two hour military bus trip to Salinas.

Upon our return to the hospital, we were given a welcome ceremony complete with speeches, signs, and children giving us locally grown roses. What an amazing gesture to welcome complete strangers into their town! We were treated like celebrities.

After the ceremony, the doctors quickly got to work triaging the hundreds of patients that came to see us. The orthotist, physical, and occupational therapists, and many nurses were busy unpacking and organizing the supplies as well as setting up the operating rooms. Dr. Elmgren and a couple of nurses got to work triaging children with urological problems like un-descended testicles, hernias, and problems with urination. Drs. Shaw and Gallagher, the physical and occupational therapists, and a few more nurses were busy seeing children with club feet, hip and knee dislocations, cerebral palsy and genetic deformities. Once children were identified for surgery, the anesthesiologists would examine them to determine if they were healthy enough to have surgery. At the end of the day, surgery schedules and appointments with the orthotist, and the physical and occupational therapists were made. Those children living far away were scheduled for surgeries early in the week and those living nearby were scheduled for later in the week. We had a full week ahead of us!

After a week of work performing around 50 surgical procedures, Dr. Elmgren made his scheduled departure and we welcomed the arrival of Dr. Rowell, an ophthalmologist. He had a couple hundred patients waiting to be triaged that afternoon. With the help of three interpreters, he made it through everyone who was there. He made all of us promise to never tell his office manager about how many patients he saw that day for fear that his schedule at his home office would be just like this Sunday afternoon. Needless to say, his surgical schedule was filled for the coming week performing tear duct and strabismus operations. He operated on 35 children with many of them needing multiple procedures.

Drs. Shaw and Gallagher had a full two weeks of surgeries. In fact, there were so many children that needed orthopedic work, it was impossible to fit them all into their schedule. That being said, they were able to fill the hospital’s four recovery rooms with multiple children in each room. Extra mattresses were obtained for recovering children to sleep on the floors in the hallways when all the space in the recovery rooms was filled. On cast changing day, 59 children were lined up in the hallway in the order in which they were scheduled to get their casts changed. The hallway with children was jokingly called, “Club Club Foot” in reference to the Club Med resorts. What an incredible sight!

A memorable patient on this trip was a beautiful nine year old girl named Astrid who had never walked normally. She was born with deformed legs projecting out from the backs of her knees and “walked” on her knees with virtually useless appendages trailing along behind. Dr. Shaw did an amputation of her legs at the knee and we fitted her with artificial legs using bracing hinges for “knees” attached to fiberglass sockets molded to fit to her thighs. Guy Farris, our orthotist, remarked, “God gave us inspiration, understanding, and guided our hands throughout the process.” Astrid was (literally) “standing tall” and taking steps in a walker on new legs within days of her surgery!

Throughout the two weeks, our breakfasts were good if you like eating eggs with ham and cheese every day. We drank juices from fruits we had never seen nor heard of before. The hospital kitchen staff cooked delicious lunches. Sometimes we ate fresh fish and shrimp caught that day. We’d return to the hotel for dinner each night. Eric Miller learned the valuable lesson of never buying the pre-peeled shrimp in the local fish market because they are the older shrimp and are brined in salt water to preserve them. Locals know to soak them in water to remove the salt, but this gringo served very salty unpalatable shrimp for lunch one day. Luckily no one got sick. With the help of Dr. Figueroa, a few of the ladies from the Women’s Auxiliary, and the head of the local fish market, we were able to get our money back the next day from the vender who sold them to us.

The appreciation for our team began with the welcome ceremony the first day and never left throughout our entire stay. We were chauffeured by Ecuadorian Navy’s military bus. The City of Salinas also provided a driver and vehicle for us to use to purchase local supplies. The personnel at The Dr. Jose Garces Rodriguez Hospital were extremely generous with providing us extra supplies due to the extremely large number of cases we had. (We had planned to do about 100 surgical procedures, but ended up doing almost 200.) The Salinas Lions Club heard of our work at the hospital and donated hundreds of feet of PVC pipe from which we could make walkers and crutches.

Despite the wonderful welcome, this trip was physically tiring; our team members worked mostly 12 hour days and had no significant “down time” to take in the local sights. We performed life-changing surgeries, saw loving hands comfort hurting children, and parent’s shed tears of gratitude and hope for their children. The children even drew pictures for us that were posted on the hospital walls for all to see.

Although we helped many children and reassured others, we were not able to help all the children who needed help. There were just too many for this trip. However, due to the continued need of the local residents and the overwhelming support of the Salinas community, we hope to return to Salinas in the summer of 2009.