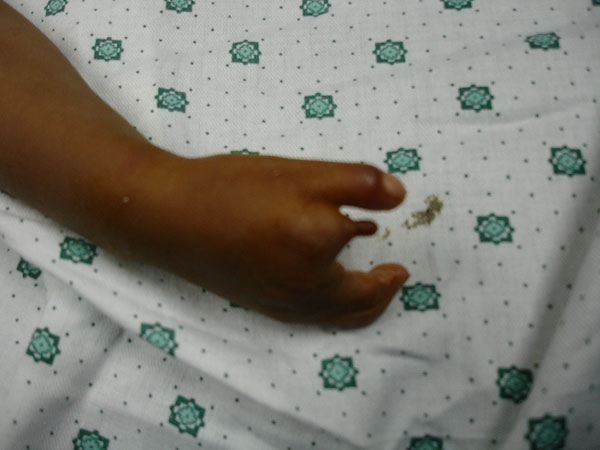 Narrative:
Olger, a 4 year old boy, had never walked and never stood up. He crawled wherever he went and the top of his foot served as its bottom. He suffered from cerebral palsy. Dr. Shaw lengthened his heel cords and casted his legs. Later he was able to stand for the first time by leaning against his mother. He burst out in a Quechean song of victory about his new accomplishment. He was later given a PVC walker to help him walk independently and he returned to his home village in the mountains.

Later a social worker from the Kausay Wasi Clinic followed up with him and found him walking like he did prior to surgery. His walker was in a garbage pile. Apparently, his family had to go to work in the fields away from their home and Olger’s new mobility was a safety problem. The social worker got the walker and worked with village authorities to provide supervision and support. Two unused narrow electrical poles were used to make parallel bars and strengthen his legs. Many people in his village joined together to help rehabilitate Olger and now he’s attending school and using his walker.

Boris, an 8 year old boy, had a tumor in his jaw. The tumor was excised, studied and determined to be benign. Despite having a bandage on his face, he had a wonderful smile. While in the recovery room himself, he made a wonderful nurse. He would get nurses when other recovering children needed help beyond what their parents could provide. He made sure other children took their medicine on time. Perhaps he has a role in one of our future campaigns.

Another child had three missing fingers and an unusable stub for a middle finger. He wasn’t able to have his fingers reconstructed. He also wasn’t able to sleep at night because he reported that the chickens in his home kept pecking at his stub apparently thinking it was a grain of rice. It was decided to amputate the middle stub and provide therapy and bracing for the hand.

A 10 year old boy came to us who had previously suffered from a femur fracture. A metal rod had been put in his body, but when he came to us, the rod was sticking out about an inch near his hip and it was badly infected. When he moved the rod would catch on his clothes and create pain. It was decided to perform surgery to remove the rod; however, when nurses were scrubbing the site preparing for surgery, the rod simply fell out on its own. Two days later the infection was gone and the problem was simply solved.